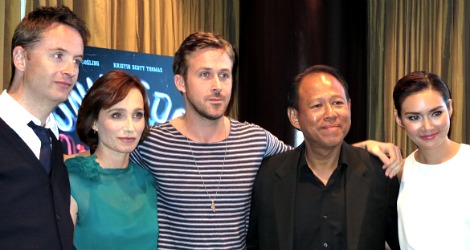 At a packed press conference last week at the Mandarin Oriental Hotel on the Upper West Side, Gosling joked around with fellow cast members and reporters and flashed his famous smile.

Thomas and Gosling had some witty exchanges, including joking about a grisly scene where he digs around in her womb (don’t ask).

The actress said she found delivering the foul language challenging.

“It was a very difficult thing to do because there were some words that just wouldn’t come out. Do you remember?” She turned to the 43-year-old writer-director, who despite making bloody films like “Bronson” and “Drive,” looked like a harmless schoolboy in his short pants, white shirt and dark tie.

“We had a speech coach who helped constantly make sure the American accent” was accurate, said the director.

“The nice, well-brought up girl couldn’t say those things,” Thomas sighed. “It became a kind of handicap, and I remember we must have done 14 takes.”

Her most shocking scene takes place during an intimate dinner with her son and his prostitute girlfriend (Rhatha Phongam). She rips into him, and even compares his penis size unfavorably to that of his psycho older brother Billy, who has been murdered. Crystal’s mission in coming to Bangkok is to get revenge on the man who killed him, and she wants Julian to arrange it. “It’s more complicated than that,” he tells her. His brother may have had it coming; he raped and killed a 16-year-old girl.

Crystal’s breezy reply: “Well, I’m sure he had his reasons.”

What complicates things is that the man whose head she wants on a platter, Chang, a retired police officer who has taken on the role of avenging angel/demon (Vithaya Pansringarm, who in real life is a martial artist with a fifth degree black belt in Kendo), is awfully handy with a sword. Chang’s brand of enacting justice includes scenes where he throws boiling oil in a man’s face, pierces someone’s eardrums with needles, and slices and dices body parts, including the old standby, chopping off hands.

The most colorful and vibrant character in the film is Crystal. In the production notes the director said he wanted Crystal to embody “absolute evil,” that she was “a combination of Lady Macbeth and Donatella Versace.”

Thomas said she modeled Crystal’s look on the fashionista.

“I did a photo shoot about a year before we started talking about Crystal, and I was dressed up in that similar kind of thing, a la Donatella Versace, and I was amazed by people’s reaction to me and how people, the atmosphere around me, changed completely. Men particularly became incredibly aggressive. And women cowered and were kind of nervous and I felt really, really uncomfortable and it struck me that there are women all over the planet who think this is an ideal of beauty that they want to emulate. Every day they will get up and do this whole thing and create this kind of atmosphere, so it seemed to me a really good way to get into a character, to have this kind of war paint or this kind of armor. She’s dressed for battle if you like, which was a way for me to get into this character that I didn’t really have a clue about.”

Among the changes in the film was Crystal’s nationality, which was originally English. She became American when Gosling came onboard, which made the actress feel even more distant from her character. “I felt at least some relationship to her when she was English and then she changed and that was that.”

Much of the film’s dark humor derives from Thomas playing against type although she doesn’t see anything funny about the film. “I think if we do laugh at it, it’s simply because we don’t know what else to do, but I don’t actually see much humor in this film. It’s not a humor I recognize anyway. I find this film deeply shocking and disturbing.”

Gosling shrugged off the question as to whether he was concerned about what being in such violent films would do for his “image.”

“I guess it feels like a lot, but for me it’s only in the last two years that I’ve been experimenting with these kind of films, and the reaction is so strange, much stranger than anything I’ve ever done before,” Gosling said.

“For instance, when we did ‘Drive,’ we were at Cannes and Christina Hendricks gets her head blown off and everybody cheered and they were just so happy about it and excited and started stomping their feet and clapping and it was the most bizarre reaction that I could have imagined … I feel like I’m learning about it. I don’t really understand the reaction to it, but obviously there’s a real hunger for it, and I think Nicolas understands that.”

As for whether he saw black humor in the film, “This was not the funniest character I’ve ever played,” Gosling said. “Do I think that the movie’s funny? I was apparently deadpan, so that’s always a funny thing to cut to.”

It came up that the Danish director shoots his films in chronological order, which Thomas said was a big plus as an actor. “It’s so rare to do. It’s a huge luxury really not to have to leap backwards and forwards. It makes life easier technically as an actor and in keeping track of what you’ve done … It also makes everything much suppler, much softer and much more open and much more malleable and you can change everything, so we changed so much.”

Refn said a book on John Cassavetes that his mother gave him inspired him to shoot his films like the director, chronologically. “I was like, I’ll do that. It seemed so natural, I guess. That’s almost a way of submission. It’s submitting completely and fully to the creative process. I don’t fear insecurity under pressure. I think it’s being creative. It’s like speed. You get amped up.”

Asked how receptive the director was to her suggestions, Thomas said, “I certainly felt free to suggest anything outrageous and know that no one was going to gasp and giggle or no one was going to look at me disapproving and say, ‘What were you doing last night?’ It was going to be taken seriously as a proposition and not as a judgment of my own character or creativity.”

Gosling said Refn rejected some of his ideas. He wanted to be English, which the director immediately shot down. “I wished that we could have done a few less of those fight scenes, a few less of the takes, right?” he turned to Pansringarm. “We got turned down on that too.”

There is one particularly savage and lingering fight scene between Julian and Chang where Gosling’s face is beaten to a bloody pulp.

“How many days did you take to do that?” Thomas asked Gosling.

“That’s so long. Three days? I was at the beach,” Thomas said.

Gosling shot her a pained look.

Someone asked Gosling about a comment he made at Cannes – where the film screened to both applause and boos – that he once hid VHS movie tapes in his pants.

“How do you put them in your pants?” Refn asked.

“Do you really want to know about this?” Gosling replied. He pretended to stuff tapes down the front of his pants. Refn looked bemused.

“When I was little I saw ‘Rambo First Blood’ and I took knifes to school and I threw them at the kids, so my mother took me off of R-rated films,” Gosling recounted.

“I got my hands on “Blue Velvet,” and I had to sneak it in my house. I had to stick it in my pants to do it. Just the idea of a film like that, that you couldn’t show anyone, that you had to hide in your pants, just felt good, and it made an impression on me that I wanted to make something like that one day.”

Gosling smiled, closed his eyes and said sheepishly with an input of breath, “Yes.”

The packed room of reporters erupted in laughter.

Gosling said he was a big fan of the risqué Lynch classic even though he was only a kid, 12 at the time. When another reporter wanted him to elaborate and the needle got kind of stuck on the topic, Gosling shut up. “You’re right, I should stop talking.”

When asked about future projects, Thomas said she was shooting a film with Michelle Williams, “Suite française,” a romance set during the German Occupation of France, which was a return to more refined roles.

All attention was focused on Gosling, who finished directing his first film a month ago and is now editing it. Actors are a superstitious bunch and he wasn’t ready to talk about it. The film, “How to Catch a Monster,” stars Saoirse Ronan, Christina Hendricks and his girlfriend, Eva Mendes.

Someone asked if he was ready to direct another film.

“Let me finish this one,” Gosling replied. So he’s not aiming for Sundance?

“I just want to finish it,” he replied good-naturedly before exiting the press conference.