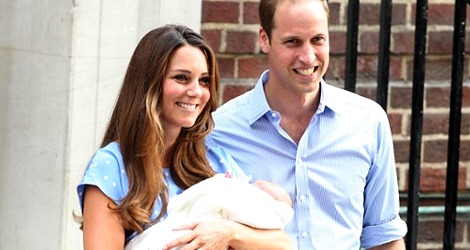 Kensington Palace released a statement today announcing that the new Prince of Cambridge has been given a name: George Alexander Louis.

I had actually guessed George Alexander Charles on my Facebook page back on Monday. I was so close!

See Photos of the Royal Baby!

“The Duke and Duchess of Cambridge are delighted to announce that they have named their son George Alexander Louis,” the palace said.

The baby’s official title is His Royal Highness Prince George of Cambridge. I’m sure someone’s already started a Twitter feed with the name GeorgeAlexanderLouis and the Twitterverse will be abuzz with the hashtag #GAL.

The new family left Kensington Palace today on their first road trip, likely to Kate’s parents’ home in Bucklebury. William’s grandmum, Queen Elizabeth II, already stopped by to visit her new and first great grandson before she headed off on holiday herself.

Congrats to the new parents!