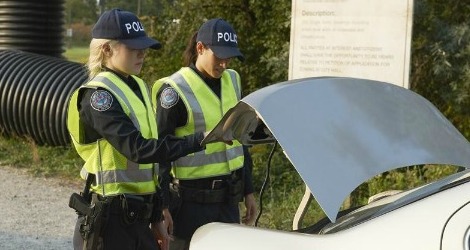 There are two plotlines at work in this episode of “Rookie Blue,” and they’re both so good!

Andy and the rest of the gang have one more shift to work before they’re all off camping together for the long weekend. Since it is the long weekend, everyone’s out making spot checks on drivers headed out of the city on their way to lakes and cottages.

Meanwhile, back at the station, Swarek’s working on a case involving the shooting of a 16-year-old boy, Ricardo Sanchez. It’s a puzzling case, because the boy doesn’t appear to have any gang connections. The only clue is surveillance footage of a car that pulled into the parking lot shortly before the shooting. They can’t see the plates, but it’s a distinctive make and model of car, in a distinctive color, so Swarek has all the officers on the lookout for the vehicle.

The spot checks are working out pretty well – they’re pulling in a lot of drivers who seem to think it’s better to drink, then drive. Gail and Andy pull over a young driver who appears incredibly nervous, and when they ask him for ID, he races off. They catch up with the car, left abandoned, and find a 15-year-old boy, Alex, in the trunk.

On the way back to the station, the boy suddenly begins bleeding through his nose. He looks whoozy, too, so Gail and Andy decide to take him to the hospital to get him checked out. He has a concussion, but there’s more. It turns out Alex is transgender: his parents have just thrown him out of the house because they can’t cope with it, and he had been visiting the only friend he has in the world, a girl named Dawn. Dawn’s older brother was the one who’d tossed him into the trunk of the car.

Gail and Andy are able to trace the abandoned car Dawn’s brother was driving; they arrive at his house in question and arrest him for assault and kidnapping. In the meantime, Alex has run away from the hospital. He’s been trying desperately to contact Dawn; Andy finally gets a chance to speak to him, via videophone. Alex is definitely not doing okay: something’s terribly wrong. Using the visual clues in the video call, Andy and Gail track Alex to the motel where he’s staying. He’s slashed his wrists, but luckily they get him to the hospital in time.

Back at the spot checks, Oliver and Chris can’t believe their eyes. Coming toward them is a car of the same make, model and color that Swarek’s asked them to keep an eye out for.  They take the driver into custody and bring him back the station, where Swarek discovers the man, Cesare Medina, is a reformed gang member who’s been living in Montreal and mentoring former gang kids. The 16-year-old murder victim, Ricardo, was his cousin; Medina had made a special trip back to Toronto so he could buy Ricardo a special gift, a custom-made skateboard.

Medina’s car has three bullet holes in it; it’s apparent that whoever shot Ricardo was aiming for Medina. Medina refuses to identify the shooters, though. Swarek knows Medina’s wanting to take justice in his own hands. Swarek can only hold the man for a little longer, and once he’s released, Medina will likely do something that will put him in jail for a very long time.

But the investigation’s still continuing, and soon Swarek gets a printout of the text messages Ricardo received and sent right before the shooting. It’s very clear that Ricardo set his cousin up, probably as part of a rite of initiation into the very same street gang that Medina had left behind. When Medina sees this evidence of his cousin’s betrayal, he identifies the men involved in the shooting.

Two great plotlines! I really felt for poor Cesare Medina – he’d done so well for himself, getting and staying out of trouble, and there was his cousin signing up for the same gang Medina had worked so hard to leave behind, and worse, deliberately handing over his cousin to them in order to show his loyalty to his new gang.

And Alex’s storyline was handled well and sensitively. It was wonderful that everyone continued to identify Alex as a boy – there was none of that “he or she?” debate you sometimes see. Alex self-identifies as a boy, that’s who he is, and that’s how they refer to him. It was nicely done.

And Andy’s little talk with Alex in his hospital room at the end was great. She says to him, “I don’t know how hard it is to be you, but that [suicide] is not the answer … You are not worthless.” Alex replies, “I don’t know what else to do”, and Andy says, “I think you just keep going and every day it just gets better, little by little.”

Alex says, “How do you know?” A very good question. I mean, you can give advice, but if you haven’t lived Alex’s life, faced the choices and the consequences he’s faced and continues to face, on what exactly do you base your advice? Andy replies: “You’re fifteen years old and you already know who you are. I mean, that takes most people such a long time to figure out. Believe me, I think you’re incredibly brave. And you’re smart and kind and honestly, the world is a better place for it. I just met you, and I’m sure of that. So let’s keep going, okay?” The whole scene was very moving.

The scene ends with Dawn coming into the hospital room to visit Alex. It would have been nice, too, if the writers had included a visit by another transgender person, an older person perhaps, maybe sent by Social Services or by an organization contacted by Social Services, just so we know that Alex will have some form of support as he goes on with his life. But all in all, I thought the plotline was well handled.

And then, of course, we have all the continuing plot elements, those things which draw me back to the show every week. Andy and Sam are still estranged, but there’s a little moment where they bump into each other and in all that awkwardness that ensues you just know there’s still something there.

And finally, there’s perky Chloe, pursuing Dov, and Gail being Gail, telling Chloe exactly what she thinks of her. And Chloe (accidentally? or not?): “You’re, like, a terrible person … I don’t know how Nick … no wonder he’s falling for Andy.” Ouch! Poor Gail! (I know, I know, she’s the “mean girl” but we’ve also seen who she really is underneath it all, so we get her and still sort of like her, right?)

Your thoughts on this episode of “Rookie Blue”? Leave comments below!