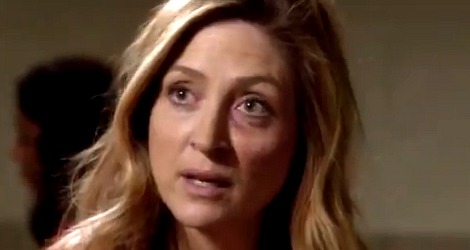 This episode of “Rizzoli & Isles” made me sad. But it also gave me hope in the justice system, when so often, our real-life justice system seems broken. Maybe you need a best friend to get you out of jail if you happen to end up there.

That’s how this episode rolled along. Maura ended up in jail for a crime she didn’t commit, and Jane worked every angle she could to get her out.

It all started at a bone marrow fundraising event. After some snappy banter wherein Jane is mistaken for a catering worker and Maura tells her she should have worn a dress, Jane goes home and Maura ends up leaving with a guy claiming to be a colorectal doctor.

When Maura wakes up the next morning (on the couch with a huge hangover), she’s confused. And that’s not Maura. She doesn’t even spout scientific terms for hangovers. She just looks confused.

That same day, the team gathers at the scene of a crime. A guy was found dead in his car, and as Maura starts to take a peek at the body, she’s shocked to learn that it’s the guy she left the fundraiser with last night.

Things do not look good for Maura. Her ID badge was found in the car. Her fingerprints and hair were found in the backseat of the car. The skin under the guy’s fingernails is Maura’s. She has bruises on her arms that indicate she threw a punch and was blocked by someone else. And she has no memory of anything between 1 a.m. and 5 a.m.

Jane has no choice but to arrest Maura for the murder of the guy. Maura is processed and undergoes a rape exam. Thank goodness, there’s no sign of sexual assault. “I have processed hundreds of suspects, but I never truly realized how humiliating this is,” says Maura, after Jane says they’ll need her clothes, including underwear. And all this just weeks before her notorious mob-boss father, Paddy Doyle, goes on trial for multiple crimes.

It’s a sad, sad day when Maura is forced to don the orange jumpsuit and get tossed in the slammer with a bunch of women who do not treat her kindly. In fact, one punches her in the face, at which point, a guard named Mary Pat comes to her rescue and says Paddy sends his regards. “You need anything else, you ask for Mary Pat, ya hear?”

I like Mary Pat. Can she be a regular, please? When Maura asks what Paddy does for her, in order for her to take this risk, Mary Pat says, “It’s what he doesn’t do,” she says. Mary Pat has a brother on the inside.

In prison, Maura has a revelation about a “kiss” the guy blew to her that night. Thanks to Mary Pat, Maura is able to Skype with Jane and tell her they need to do another tox screen – for Scopolamine, also known as “The Devil’s Breath.”

Scopolamine is sometimes used as a date rape drug, and, as we learned in this episode, can be used by criminals to erase your memory and render you incapable of exercising your free will. It’s derived from a particular type of tree common in Colombia called the Borrachero tree. There’s your chemistry lesson for today.

When the tox screen turns up positive for Scopolamine, it’s clear that the victim – who wasn’t a doctor at all, but rather a bouncer named Brad Adams (James Snyder, who’s had parts in everything from “Gilmore Girls” to “Drop Dead Diva” to “CSI: Crime Scene Investigation”) – played Maura.

Jane and the team determine that he used Maura to gain access to the medical examiner vault (where all the bones and evidence is kept), so he could steal the remains of a girl named Sophia, who was pregnant with the baby of a big golf pro named Tucker Franklin (Thad Luckinbill who played J.T. Hellstrom on “The Young and the Restless” and Nathan Colville on “Nikita”).

The only way Tucker could hold onto his wife and endorsement deals was to off both Sophia and Brad (ripped from the headlines?).

Good case! I loved this episode, and once again, it proved how solid Jane and Maura’s friendship is. However, I’m with Jane in that I would have deleted that self defense video Angela took to Lt. Cavanaugh. Wouldn’t you? If your best friend was in jail? Sometimes you can’t always play by the rules.

“I’m having such a nice time. Can’t you just, you know, mingle?” – Maura, at the fundraiser
“When have you ever seen me mingle?” – Jane

“Dr. Popov can’t find his own ass unless you put his hand on it.” – Jane, on the medical examiner filling in for Maura

“Dr. Popov? The guy who carries a gallon of vodka and calls me ‘girl’? Maura’s really in trouble now.” – Angela