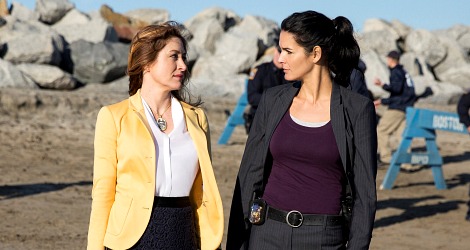 This episode of “Rizzoli & Isles,” directed by Jamie Babbit, was a good mix of family drama and police drama, with a nice dose of snappy banter between Jane and Maura. Love the snappy banter. I want to be, um, Jane when I grow up. 🙂

The case follows the murder of a college journalism student. The episode begins with her on a street at night watching a drug deal go down. She approaches the drug guys with, “Hey there, got a second?” And the next thing we know, she’s being drowned in a tub of water, presumably by one of the shady drug guys.

But the sun comes up and we’re at the Boston Police Department, with Jane and Maura debating whether coffee should be consumed inside a car. Jane says that’s what cup holders are for, but of course, Maura says no. That’s what I love about these two. It’s clear they’ve got that “opposites attract” thing going for them.

Oh, and after Maura soaks her $550 pair of shoes on the beach, Jane makes her put on a pair of yellow rubber boots, a.k.a. wellingtons. Maura looks adorable in them.

As for the body, Maura says the wounds indicate that someone slammed her head into something (which we know, since we saw it). She later determines that the girl drowned in rain water, but traces of saline, fish scales and rust were also found. They’re able to track the crime scene to a warehouse, and Frost and Korsak figure out how to access the girl’s audio files — and hear the actual murder take place.

They also go to her room at the sorority house and find a drug called “PCU Gold Dust,” but her roommate says she never did drugs and was a model student studying investigative journalism.

Meanwhile, Jane is dealing with the emotional fallout of having a former co-worker/old flame back in her life. Lt. Det. Rafael Martinez (Amaury Nolasco, who’s done a slew of movies, including “A Good Day to Die Hard” and “The Rum Diary”; he also played a detective in “Southland”) worked together eight years ago, but went their separate ways after a botched wire deal that got their CI (criminal informant) killed — a young girl named Yolanda that Jane has never quite gotten over. Now he’s back, and he’s the new boss at the Boston Police Department.

All this circles back around, because it turns out that Martinez knew about the girl — because she was working as a CI. Jane figured this out when she found a slip of paper with “CRICKET” on it — the same “safe word” that she and Martinez used with their doomed CI eight years ago.

They figure out that the killer is a state trooper, and they’re able to track his whereabouts via GPS (thank you, technology). Martinez calls Frankie to delay him, which Frankie does by parking his motorcycle behind the guys’ car. Jane and crew drive up as the killer grabs Frankie and puts a gun to his head. But – go, Frankie! – he whips around and knocks the guy over, pinning him with his bike.

Hmmm … Martinez is kind of cute. It looks like he’ll be sticking around, but what about Casey? Remember he’ll be back in a few months and wants to give it a shot with Jane…

In the “Maura’s dysfunctional family” department, Cailin comes to see Maura and says some scary men with “dark energy” came to their house last night. She wants Maura to talk to Hope and find out what’s going on. She also tells her that Hope is following Paddy Doyle’s RICO pre-trial hearings. Hmmm…

When they talk to Hope, she says the guys are her “accountants” (right, because accountants always show up at your house at 11 p.m.). But Jane figures out that some people are following both Hope and Maura, and she doesn’t like it one bit. So she goes to see Paddy in prison. They’re not Paddy’s thugs. They’re feds. But why are they surveilling Maura? What a nightmare.

Thanks to Maura piecing together the clues involving a locket that Cailin gave her, we learn that Hope started her clinic, MEND, in 1993 – 20 years ago – with $2.5 million in dirty money from Paddy.

And now everyone’s in a world of hurt. Paddy would fix things by pleading guilty, but he says he’ll never do that. Why, Paddy, why? Because you’re an idiot, that’s why.

“550 bucks! I hope they gave you the rest of the cow. For that, they should give you the whole herd.” – Jane, on Maura’s pricey shoes

“He’s vicious and competitive … wanna help me twist off his balding head? – Jane, on annoying Bob Thatcher
“Can we make it look like a suicide?” – Maura

“I’m more of a Dickensian character.” – Maura
“Or a really good guest on Jerry Springer.” – Jane

“Could you kids please share your toys?” – Jane to Frost and Korsak, who are arguing over how to work the computer

“This sounds good. Scrambled tofu patty.” – Maura, looking at a restaurant menu
“Yummy. Get it with a side of mung bean fries.” – Jane

“You told me she was dead. You told me that our baby was dead.” – Hope to Paddy
“I had to. To protect you.” – Paddy
“Why?” – Hope
“My father would have killed you both.” – Paddy
“You have another chance to protect them, Paddy.” – Jane
“Because you’re going to plead guilty.” – Maura
“You know I’d kill for either of you … but I will never plead guilty.” – Paddy