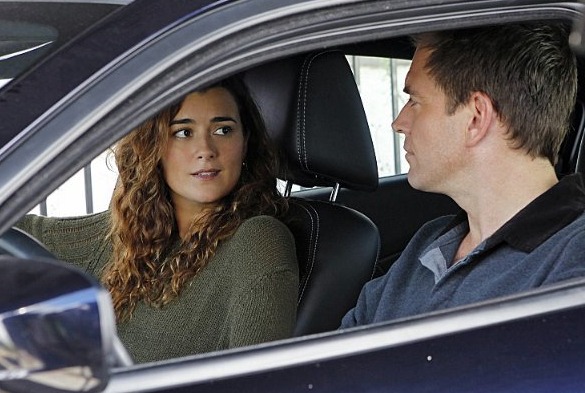 I’m a member of the Television Critics Association, but never make the winter or summer press tours, because there’s always something else going on. The summer press tour is happening right now, but I’m about to head into the madness of the Traverse City Film Festival (I’m also blogging for them here).

But this morning, TCA members received a note from Dianne Lodder, a fierce “NCIS” fan, and I wanted to pass it along to you. Rather than try and paraphrase her words, I’ll just give you her words directly.

As you have probably heard, Cote de Pablo, who plays Ziva David on ‘NCIS,’ will be leaving the show. This makes the majority of the fans very unhappy. We love Cote and we love her character Ziva. She is the most interesting character to many people and also a great role model and inspiration.

Many are also very sad because it will take away the Tony/Ziva relationship, which is a huge element in the show that many people enjoy. This is a romance we have been waiting to see happen for eight years! The past two years, especially, the writers have been building towards the moment where it would finally happen, slowly but beautifully. Now, if it happens at all, it will be rushed and bittersweet.

Moreover, the characters on the show are a family, and it will be incredibly painful to see one leave. Both on the show and behind the scenes, the cast will at all times feel incomplete. The reason this cast is so great and this show works so well is because of the combination of these people. Any change, in terms of one of the main cast leaving, will have a huge impact, and not for the better.

‘NCIS’ has been the number one show for years with ratings going up each year so far. We all know that the show really took off after Cote joined in season 3. Moreover, the episodes that focus on her character are often the ones that get the most viewers. Most of us feel fairly certain that ratings will drop after Cote’s departure.

It will be hard, we believe, for the show to keep going without her. It will be awkward. As I said before, this cast and the characters on the show are like a family, and after so many years, they feel like family to the fans too. To us, it seems that CBS does not understand how important this show and this cast is to the fans. No one is in any way replaceable!

For many reasons, most fans do not believe CBS’s official statement saying that Cote wanted to leave. Of course, we do not know the situation and are not certain about anything. Everything is very vague and the more we think about it, the stranger it all seems. It is for this reason that a lot of fans around the world have started projects to get Cote back on ‘NCIS.’

Some of the things fans have been doing include sending many e-mails, letters, notes, cards, posters, and so on to CBS headquarters and individuals at CBS. I think some people even worked together to send cupcakes and M&Ms. We have been using quotes from the show and cast, among other things.

We have also been working on picture and video projects either for Cote, to say goodbye and thank you (in case she really leaves), or for CBS to let them know we want Cote back. As you may have noticed, fans around the world who have a Twitter account took to Twitter this past week from Tuesday- Friday and got the topic trending worldwide on all those days. Tuesday’s trend was #BringBackCote, on Wednesday it was #DearCBSWeWantCote, Thursday’s was #SaveZiva, and Friday’s trend was #CotesArmy.

The last thing I will mention in this e-mail is the petition started just a few days after the news came out. After two weeks, this petition to bring Cote back to ‘NCIS’ has nearly 14,000 signatures.

Please check out everything on tumblr.com tagged under such things as ‘operation bbc’, ‘bringbackcote’ (with or without spaces), ‘cote’s army’, and ‘safeziva’.

Once again, it would be very much appreciated by approximately 99% of the ‘NCIS’ fans around the world if you would be able to help us in any way.