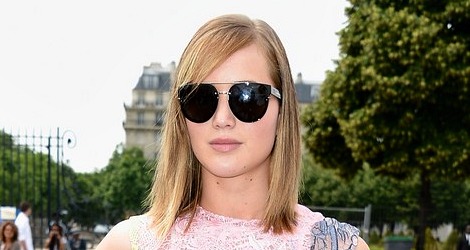 Jennifer Lawrence may be the face of Miss Dior, but I’m not a fan of the 22-year-old’s cropped top and half-billowy pants she wore to the Christian Dior Fashion Show at Hotel Des Invalides in Paris, France yesterday.

Lawrence is in the City of Light as part of Paris Fashion Week Haute-Couture Fall/Winter 2013-2014. It was also just announced that she’ll grace the cover of the highly-coveted “September Issue” of Vogue. Ok, let’s talk about this outfit. First, the hair. I love it. It’s cute, fresh and makes her look more grownup than the longer ‘do she sported last year. Also love the shades. Very glam. I want a pair of those.

The shoes? They’re cute, but nothing special. They’ve got kind of a 1950’s secretary-type vibe, but I”m ok with that.

As for the rest of it? Honestly, it looks like a home ec project gone horribly wrong. I might have been ok with the pants if both legs were either billowy OR closer-cut. But to have one leg billowy and the other close-cut, it just looks like someone lost control of the sewing machine. Or maybe had a blindfold on when they cut the fabric from the pattern. If I had to choose, I like the pant-leg with the stripe better than the billowy pant-leg.

The cropped top is ok, and makes her tiny waist look even tinier. I could see this top paired with some chic cropped black pants. Like something Mary Tyler Moore wore in “The Dick Van Dyke Show.”

What do you guys think of this outfit? Am I off-base?