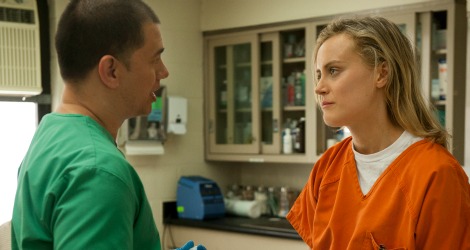 With Netflix now streaming several shows, including “House of Cards,” “Hemlock Grove,” the very popular “Arrested Development” (fourth season), and now “Orange is the New Black,” it has made a surge to try and compete with HBO, Showtime and other cable networks.

After reading and hearing about “Orange is the New Black”  for some time now, I finally had a chance to sit down with my trusted iPad and watch the first episode. The show was created by Jenji Kohan (of “Weeds” fame – I love that show), and features a yuppie white woman, Piper Chapman (played by Taylor Shilling) who lives in New York and is engaged to be married to Larry (Jason Biggs), who, I might add, is very sweet and a cutie! Aside from her engagement, she is trying to get her own artisanal soaps business up and running.

Unfortunately for Piper (who is also very cute), her past catches up with her. When she was 22, she made the mistake of dating an international drug smuggler (played by Laura Prepon – best known for “That 70s Show”), and transferred cash for her – “just once,” she claimed.

Sadly, Piper ends up having to serve a 15-month prison sentence (oh dear) in a federal prison in Litchfield, New York. Coincidentally, her ex-lover/drug smuggler is also serving time there (I haven’t made it to the two reuniting – in one way or the other – yet!).

The first episode introduces the characters, and besides the seriousness of prison life, there’s also a humorous side to the show. I laughed several times during the episode … which I really like to do. The show is slated as a comedy-drama, and there are definitely some funny lines and scenes in the first episode (those who’ve seen it know what I mean!).

Her prison life begins with a self surrender (it was funny, right?), check-in, meeting fellow inmates and cell mates, as well as learning what one can and can’t do in prison – one can really get in trouble if you get on the bad side of other inmates and/or guards. She stands out with her blond hair and classy looks.

The episode ends with Chapman feeling the reality of what she is in for.  She is left crying and very scared. I would be scared too! I can honestly say, I am looking forward to the second episode, which I am going to try and watch tonight. Piper has just begun her journey in a very bad place. I anticipate tense moments, frightening situations, and some possible bonding with other inmates.

I also look forward to the humor added when needed. I think this is a good show for women to see. It is different from many of the same themes out there, and it was just renewed for season two.

What really makes it intriguing is that the show is based on a real life story – Piper Kerman’s memoir, “Orange Is the New Black: My Year in a Women’s Prison.”

Ladies, get onto Netflix soon and watch. I think you will enjoy it.

Are you watching “Orange is the New Black”? What do you think about it? Please leave us your comments below!