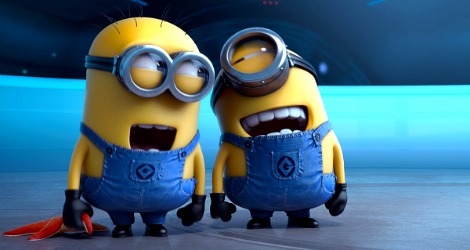 New in theaters this week…

Despicable Me 2 (PG for rude humor and mild action). Cute, cute, cute. Stand by for a glowing review from me. The animated story follows the return of Gru (Steve Carell), his new family, and the unpredictably hilarious minions. Also stars Steve Coogan, Kristen Wiig, and Benjamin Bratt. Directed by Pierre Coffin and Chris Renaud.

The Lone Ranger (PG-13 for sequences of intense action and violence, and some suggestive material). This thing is getting SLAMMED by movie critics and moviegoers. I’ll report back after seeing it later today. The story follows Native American warrior Tonto (Johnny Depp) as he recounts the untold tales that transformed man of law John Reid (Armie Hammer) into a legend of justice. Also stars Tom Wilkinson and Helena Bonham Carter. Directed by Gore Verbinski.

Hammer of the Gods (R for bloody violence, language including sexual references, and some nudity). A young Viking warrior, Steinar, is sent by his father the king on a quest to find his estranged brother, who was banished from the kingdom many years before. Stars Charlie Bewley, Clive Standen, James Cosmo, and Elliot Cowan. Directed by Farren Blackburn.

Just Like a Woman (R for language and a scene of sexuality). Mona, 26, an immigrant from North Africa, runs her in-laws’ mini market in Chicago. She’s married to Mourad, a man who can’t stand up to his authoritarian mother.  Stars Sienna Miller, Golshifte Farahani, Roschdy Zem, and Chafia Boudraa. Directed by Rachid Bouchareb.

Stuck in Love (R for language, teen drug and alcohol use, and some sexual content). Three years past his divorce, veteran novelist Bill Borgens can’t stop obsessing over, let alone spying on, his ex-wife Erica, who ignominiously left him for another man. Stars Greg Kinnear, Jennifer Connelly, Lily Collins, and Nat Wolff. Directed by Josh Boone.

The Way, Way Back (PG-13 for thematic elements, language, some sexual content and brief drug material). A teenage boy comes into his own over the course of a summer through an unlikely relationship with the man in charge of the local water park. Stars Steve Carell, Toni Collette, Sam Rockwell, and Allison Janney. Directed by Nat Faxon and Jim Rash.