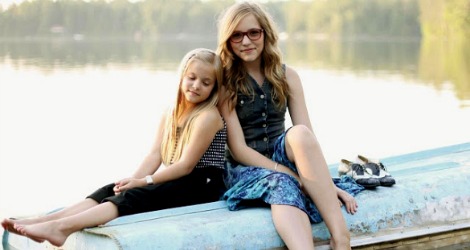 Woo-hoo! Lennon and Maisy Stella, the real-life sisters who play Rayna’s daughters Maddie and Daphne on ABC’s “Nashville,” have been promoted to series regulars for season two. The Stellas were YouTube phenoms and placed fourth in a CMT series “Can You Duet” in 2009.

Chris Carmack, who plays Will – Gunnar and Scarlett’s overly macho (but secretly gay) neighbor – has also been promoted to series regulars. Maybe Steve Grand, an openly gay country musician whose video has gone viral, will make an appearance. Or maybe the producers can get k.d. lang to pop in for a cameo.

In a scene from the show, the sisters sing “Telescope” – the same song Juliette (Hayden Panettiere) sings in the beginning of the series. Panettiere’s version was actually released as a single for radio play.

Here are the sisters singing The Lumineers’ “Ho Hey” at the Grand Ole Opry (they sang this on the show as well). Oddly, Maisy is wearing the same dress in both these videos! Plus, their version is much better than the original, in my opinion.