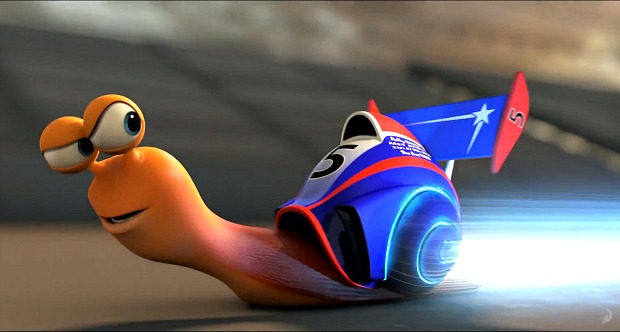 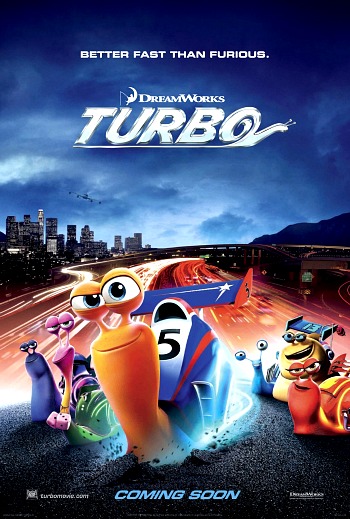 REVIEW: “Turbo” is really two movies in one. The first half of the movie, which introduces us to the snails and takes place in the garden where they “work” every day, is cute and funny. The second half of the movie, which delves into the Mexican culture in Van Nuys, California and the Indy 500 in Indianapolis, seems geared more for grownups. It’s a puzzlement, that’s for sure.

The story starts with a little garden snail named Theo (voiced by Ryan Reynolds) who wants more than anything to compete in the Indy 500. But look, he’s a snail. What chance does Theo have to race in the biggest race in the country?

Meanwhile, he’s a complete misfit in his slow-moving snail community — until, that is, he wanders out onto the highway one night and a freak accident with a nitrous oxide-powered car gives him new superpowers. His eyes light up like headlights, his shell blinks red, and he’s super-speedy. Like, really, really speedy.

When Turbo and his pessimistic brother, Chet (Paul Giamatti), fall into the hands of a Mexican taco-stand owner named Tito (Michael Pena) and his brother, they find themselves in the high-stakes world of after-hours snail racing. That’s when Turbo’s remarkable talents reveal themselves.

Soon, Turbo and his misfit band of supporters are headed to Indianapolis, where they manage to wrangle Turbo right into the Indy 500 race. But first, they’ll have to contend with racing hero Guy Gagne (Bill Hader), who’s a tough competitor.

On the surface, “Turbo” is bright and colorful, and has enough funny stunts to keep kids entertained. But I noticed that most of the kids in the theater where I saw the movie laughed through the first half of the movie, but there weren’t many laughs in the second half (see the first paragraph of this review). I’m guessing that most kids probably don’t understand the Mexican subculture or the idea that a rundown taco stand and its neighborhood are in need of a makeover (i.e. infusion of cash).

But that’s not to say the movie doesn’t have some cool things going for it. Theo/Turbo is a likeable character and someone you can really root for. He’s got this impossible dream and somehow manages to make it come true (thanks to that freak accident, but nonetheless, it comes true). And kids don’t care if the idea of a snail racing in the Indy 500 is completely implausible.

The supporting characters are funny, including a big snail called White Shadow (Michael Bell). And the little details are adorable, like Tito putting Turbo to bed with a taco sauce packet for a pillow and a blanket made of a warm tortilla. Cozy.

But there really aren’t any big surprises – there’s never any doubt that Turbo will be successful – and the movie is simplistic when compared to those other stalwart kids’ classics like “The Incredibles” and “Finding Nemo.”

And even though kids might not get the Mexican storyline, I actually appreciate the urban setting, hip soundtrack with tunes by Run-D.M.C. the Jackson 5 and Pharrell Williams, and ethnically diverse cast.

Most of all, the story is positive and uplifting. No dream is too big, no dreamer too small. Never give up. And always be true to your own authentic self.

Sex/Nudity: A group of male snails make provocative comments (“nice curves,” “giant juicy temptress,” etc.), and it turns out they’re talking about a garden tomato. A female snail flirts with a male snail; later they appear to be a couple.

Violence/Gore: A few scenes are perilous, like a snail’s close encounter with a lawnmower, a dangerous trek on a busy highway, and a car crash (no one is seriously injured). Crows swoop down and pick off snails (I’m guessing they’re eventually eaten). A crow gets hit by a bus. References to someone being “slaughtered” or “dead meat.”

Profanity: Snails have questionable names like “Smoove Moove” and “Skid Mark.” Some teasing and occasional mild language, like “son of a gun.”

Drugs/Alcohol: During meals, adults drink what appears to be bottled beer.

Which Kids Will Like It? Kids 6 and older who like colorful animated movies with talking  animals (or in this case, snails).

Will Parents Like It? It’s entertaining, but not really a gamer-changer in the world of animated movies.