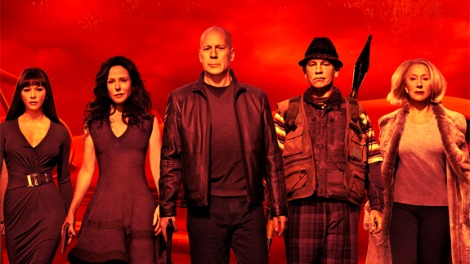 Join this gang of assassins and see the world. “RED 2” locations in Washington, London, Paris, Moscow and Hong Kong were filmed in Canada, London and Paris, which adds to the fun, but the real joy is the cast of killer characters.

D.C. comics had released a limited edition of an adventure story about the aging spies and assassins that people RED, but the film is more a spoof of the comic-book style of Bang! Pow!, as well as getting its digs into martial arts movies and car chases and things that go BOOM. In other words, there’s lots of violence, but it’s all so over the top that you don’t believe it for a split second and you’re more likely to be roaring with laughter than cringing.

When approached by D.C. Comics, Warner Brothers, who had done other films based on D.C. Comics, turned down “RED.” Somebody at Warner must be slapping themselves on the forehead at the missed opportunity. When the first film finally came together, the incredible cast included Bruce Willis, John Malkovich, Helen Mirren , Morgan Freeman, Mary-Louise Parker, and Richard Dreyfuss. It was also the last film made by Ernest Borgnine.

In “RED 2,” most of the gang is back together, except for Morgan Freeman, who unfortunately got knocked off in the first episode. In “RED 2” we get the ever politely gentle psychopath played so well by Anthony Hopkins, a brilliant physicist who hid an atomic device in the Kremlin years ago.

Mary-Louise Parker, Frank Moses’ girlfriend who’d rather kiss than kill, gets competition from the sex-pot Russian agent played by Catherine Zeta-Jones. Except for these two hypenated ladies, this is a gang that would look at home in a retirement community playing golf. If they could be persuaded to leave the guns behind.

Frank Moses – Bruce Willis – has earned the rating of “Retired, Extremely Dangerous” from the C.I.A. Willis deadpans his way through the plot, with the occasional trademark smirk. And by the way, Willis has the most beautifully shaped bald head you’ll ever see.

Helen Mirren brings her classical flare to an aging broad who can’t quite give up her occupation of hired assassin, which she practiced with MI6 in Great Britain. She even gets to spout some Shakespeare when she puts down her machine gun to play a loony who wears a crown and claims to be Queen.

John Malkovich, a total crazy man (“Can we kill them now?”) is Frank Moses’ best friend and sports a wardrobe to die for. (If you’ll pardon the expression).

Taekwondo-ing his way through total destruction of a fast-food store, Lee Byung-hun is a Korean actor playing – wait for it – a Korean assassin.

Reviews of “RED 2” are mixed, but in reading through some of the negatives, I’m finding evidence that these reviewers left their sense of ridiculous at the door of the theater and were looking for something meaningful. Pshaw! Send the gang after them. After all, as Malkovich reminds Bruce Willis early in the film, “You haven’t killed anybody in months!”

The crowd of mostly retirees that attended the showing I saw laughed heartily and walked out of the theater smiling. They found the movie empowering. When I got home, my adult son called, and I said, “Don’t mess with me. I’m channeling Helen Mirren.”

And I didn’t mean I was wearing a crown.