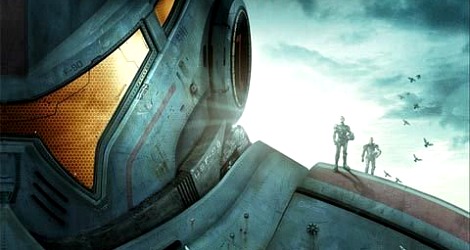 When the creatures started rising out of the sea, I immediately thought of “Godzilla.” But they also resemble the creatures in the “Alien” franchise, and they have a hive-like mind that reminded me of “Star Trek’s” Borg collective. And with the whole giant robot theme, you can’t help but think about the “Transformers” franchise. And yet, “Pacific Rim” still manages to stand on its own two (massive) feet.

The story takes place in the future, where giant monsters known as the Kaiju arrive from another dimension, emerging through a fissure in the ocean floor. The humans eventually figure out a way to fight them, using giant robots called Jaegers.

But the Jaegers are so large and complex that they must be piloted by two people who are mind-melded together — an action known as “the drift.” Raleigh Becket (Charlie Hunnam) and his brother Yancy (Diego Klattenhoff) are perfectly suited for the job – until Yancy is killed during a particularly brutal Kaiju attack.

Raleigh wants nothing more to do with the Jaeger program and goes to work at a construction job – until his old boss, Stacker Pentecost (Idris Elba), solicits his skills for one last attack. But who will partner with him? That task falls to a tough female named Mako Mori (Rinko Kikuchi), who has her own reasons for wanting to fight the creatures.

Meanwhile, two scientists, Gottlieb (Burn Gorman) and Dr. Newton Geiszler (Charlie Day), search frantically to uncover the secret of the Kaiju before they destroy the entire planet. The scientists also provide some much-needed comic relief to an otherwise robot-heavy movie. “Pacific Rim” doesn’t really seem like a Guillermo Del Toro movie, mainly because his other movies like “Pan’s Labyrinth,” the “Hellboy” franchise,” and even his children’s movies like “Rise of the Guardians” and “Puss in Boots” generally feature complex stories and characters. “Pacific Rim,” on the other hand, is big and loud, and you wouldn’t recognize it as a del Toro movie at first glance. And while not necessarily secondary, the characters and their development are on equal footing with the robot/monster storyline.

With cheesy lines like Idris Elba’s “Today we are canceling the apocalypse!,” I wouldn’t call this a movie for wordophiles, but the acting is good, given what they have to work with. Del Toro’s favorite actor, Ron Perlman, shows up as a black market monster parts dealer, but the standout performance is Kikuchi’s meek but ferocious female fighter, who shows that beefy guys are not the only ones who can fight.

Not surprisingly, the special effects are spectacular, and the movie makes good use of themes like various cultures coming together for the greater good and individuals using teamwork to get the job done.

All in all, “Pacific Rim” is the penultimate summer movie blockbuster, even though after an hour of fighting robots, that’s pretty much all I needed.

Sex/Nudity: Charlie Hunnam’s character is shown shirtless a few times. A male and female character are attracted to each other, but their relationship is mostly non-sexual until a near kiss at the end.

Violence/Gore: Fight scenes between giant robots and monsters feature punching, smashing, destruction of property and cities, and a high body count. A main character dies. Flashbacks include a young girl being chased by scary monsters. Constant peril throughout the movie, and a few characters suffer nosebleeds because of their connection to the monsters.

Which Kids Will Like It? Kids 13 and older who like action movies with massive fighting robots (i.e. the “Transformers” franchise).

Will Parents Like It? Though this movie includes many stereotypical characters and dialogue, there’s still a lot to like about it – if you like action movies with big robots.