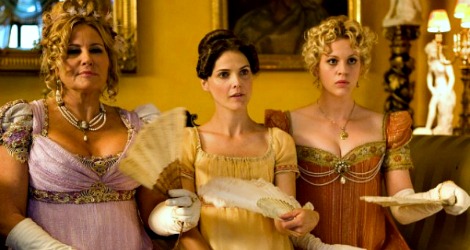 Calling all Anglophiles, romantically-minded females and men who want to make their better half happy – start queuing up for the August 16 opening of “Austenland.”

Yes, men, it’s a romantic comedy, and I promise before you get through your first eye roll, you will be laughing out loud. This movie is genius and will start a new wave of Austenitis. Maybe someone will actually create an Austenland.

Thanks to Sony Pictures Classics for the after party and swag at the preview. Of course, there were tea and scones and photo ops with a life-size cutout of Mr. Darcy a.k.a. Colin Firth. Also in attendance was handsome Ricky Whittle, who plays enchanting eye candy Captain George East, and whose character arrives mid-film to inject another level of fundom to the mix.

Many thanks to the members of the Jane Austen Society of America, Southwest and their companions for supplying the ambience by attending in period costume. JASNA-SW should prepare for a huge surge in membership in the coming months.

“Austenland” is one of those movies I knew I wanted to see as soon as I heard the title. I didn’t need to know who the cast members were, the premise, or who wrote and directed the film.

But the cast was magnificent in their silliness. It’s Jennifer Coolidge’s funniest role since “Best in Show.” I don’t want to give anything away and spoil the experience; just go and enjoy. If you feel the same, you need not read further.

There are some pretty powerful women behind this project, including producer Stephenie Meyer (yes that one), co-producer Jan Hooks, and director Jerusha Hess who brought us that indie gem “Napoleon Dynamite” and also co-wrote the screenplay with the book’s author Shannon Hale. Happily, a copy of the book was in my swag bag. I predict Sony will be happy with the numbers as their word-of-mouth ‘tell a girlfriend’ ad campaign kicks off the latest craze of Austenitis. Sit back and enjoy the spread of infection.

P.S. In the meantime check out Oxford Dictionaries ‘Which Jane Austen character are you?’ After taking the quiz, it turns out I’m Elizabeth Bennett.