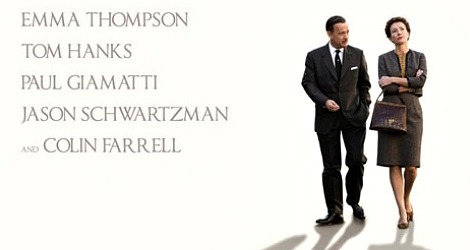 Sometimes simplicity can be just stunning, and in my opinion, in the first poster for “Saving Mr. Banks,” simplicity is done just right. See for yourself: Nothing splashy but very arresting despite the simplicity. I think PL Travers would approve, don’t you?

Subtitled “Where her book ended, their story began,” “Saving Mr. Banks” tells the story of the two weeks in 1961 during which Walt Disney (Tom Hanks) woos PL Travers (Emma Thompson) for the movie rights to “Mary Poppins.”

The “Mary Poppins” books have long been favorites of mine – their charm hasn’t faded with time, and I still reread the stories quite often (there’s a depth to the books that makes them just as accessible and appealing to adults as they are to children). I’m very excited about the release of “Saving Mr. Banks” and can’t wait for its release date: Dec. 20, 2013.

If you haven’t seen the trailer yet, make sure to watch it here. Interestingly, Thompson’s portrayal of PL Travers reminded me of the somewhat difficult and quirky Mary Poppins herself!

What do you think of the poster? Just right in its simplicity, or in need of a bit more oomph? Let us know your thoughts below!