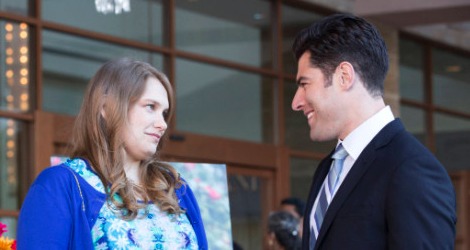 Merritt Wever, who recently received her second awards nomination for her role as Zoey Barkow on “Nurse Jackie,” is set to return as Schmidt’s former and current flame, Elizabeth, on “New Girl.”

She’ll be back for at least two episodes, including the season premiere on Sept. 17, 2013.

If you remember, Wever was left hanging after she gave Schmidt an ultimatum, “Her or me?” after she asked him to choose between herself and Cece, who found herself unwed after Shivrang ran off with Elaine, a former flame (played by Taylor Swift).

I’m looking forward to Wever’s return. I like the character of Elizabeth. She keeps Schmidt more or less on the straight and narrow, though it’s when he goes off that path that is the most hilarious.

Who do you think Schmidt will ultimately choose?