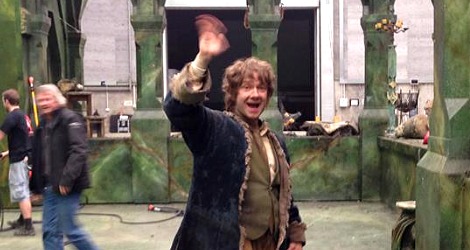 Don’t you just love hearing news about “The Hobbit”?

On his Facebook page, director/producer Peter Jackson posted that, after two and a half years of filming, Martin Freeman (the hobbit himself!) has just finished shooting his last scene as the beloved Bilbo Baggins.

“Tonight Martin Freeman finished his last shot as Bilbo Baggins. The end of an incredible two and a half years. I cannot imagine anyone else in this role – a character that Martin has nurtured and crafted with love and great skill,” Jackson wrote.

I can’t see anyone else in the role of Bilbo Baggins either!

Jackson doesn’t say, but I’m assuming this last scene Freeman just filmed was probably for “The Hobbit: There and Back Again” (anticipated release date: December 17, 2014), the last installment of the trio of films adapting J.R.R. Tolkien’s “The Hobbit” (although in the movie-making world, scenes are always filmed out of order, so who knows!).

The second film in the film trilogy, “The Hobbit: The Desolation of Smaug,” arrives in theaters Dec. 13, 2013.

Here’s the official trailer for “The Hobbit: The Desolation of Smaug”? Isn’t it just so awesome? I can hardly wait until December!