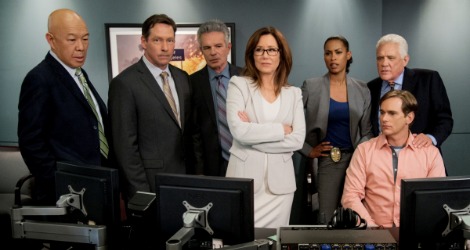 This episode of “Major Crimes” finds Sanchez and Tao with a ride-along — a nosy TV writer and producer who immediately finds himself in the midst of a high-speed car chase. When they finally catch up with the guy they’re chasing, he gets out of the car with a WHOLE lot of blood on his clothes.

The investigation leads to a chop shop with blood on the floor and several bodies in the “pit” where mechanics work on cars. So the guy is one of those mechanics who SAYS he was working on a car when the bodies tumbled in on top of him. Of course, there’s more to the story.

He’d stolen the car and took it back to the shop to tear apart, as chop shoppers are prone to do. Back at the police station, his story is a sad one – he was covered in blood, driving a stolen car, and in the country illegally. And “traumatized” by the bodies.

Of course, the Major Crimes crew doesn’t find his story all that credible. Turns out, he’s got a record in Mexico. He’s wanted for drug racketeering, he’s a member of the cartel, and Mexico wants him back.

And as it turns out, his mom is the ringleader. And she’s also an attorney who knows how to play the system. At one point, it looks like they’ll get off scott free, but Capt. Raydor and crew work it so that justice is served. It gives me hope for our justice system, which can be wacky at times.

In the Rusty department this week, he has to write an essay for school about the person who influenced him most. At first, he says it was himself. Then Capt. Raydor. And finally, his biological crack-addict mother, but not for the reasons you might think. She taught him what NOT to do in life.

I love the relationship between Rusty and Capt. Raydor, and basically the whole Major Crimes gang. All of them are like his family.

Thoughts on this episode of “Major Crimes”?