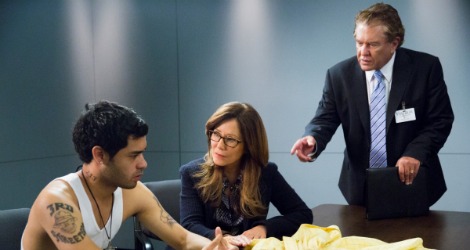 This is the kind of “Major Crimes” episode that makes me glad I live in northern Michigan and not a big metropolitan area. I mean, bad stuff happens everywhere, but you’re less likely to die via a drive-by shooting in Traverse City than Los Angeles. For now anyway, and let’s hope it stays that way for a while.

This episode starts at a gas station, where, of course, people are getting gas … a woman coming home from work, a dad and his son… Suddenly, a car drives up and two iffy-looking guys get out. The dad knows something is up and tells his son to get in the car – right before another car drives by and unleashes a hail of bullets, killing four people, including the woman getting gas. I think the dad was ok. Hope so, anyway.

Major Crimes investigates, believes it to be gang-on-gang violence, and gets the number off the license plate of the shooter’s vehicle. They determine that the vehicle was stolen specifically for the shooting, but Capt. Raydor doesn’t want to release the video and tip off the rival gang. The crew quickly apprehends two people they believe to be involved somehow.

Raydor asks Jack if he’ll be a court-appointed attorney for the suspect, because she wants to move on this thing ASAP. Of course! He’ll do it! He immediately springs into action and starts looking for a tie.

But … turns out it’s not gang-related, after all. When DDA Rios tries to pin it on a gang, Sanchez gets all up in her face and yells at her, telling her she knows nothing about it. Did SHE grow up sleeping on the floor to avoid being hit by drive-by bullets?! And by the way, “Stop talking to me like I’m a waiter!” You go, Sanchez.

Cut to the interrogation room, and Speedy, the guy they apprehended, is all Jesus-talk and prayers, and also, his name isn’t Speedy anymore. It’s Javier. And he just got out of prison. During Raydor and Rios’ questioning, Javier perks up at the mention of Browning Security Co., but Jack jumps in and says they can’t question him about it unless it’s on the list. This scene ends with Raydor stomping out of the room and slamming the door.

Things are going to get interesting at home later. But hey, SHE’s the one who asked Jack to be Javier’s court-appointed attorney. He’s just doing his job, and apparently, he’s delivering more than she bargained for.

Rios asks Raydor if she’s sleeping with Jack. “Of course not,” says Raydor. “He’s my husband.”

At home, Rusty tries to get out of going to school because he’s supposed to go over to Kris’s house for dinner and meet her parents, and he’s super anxious about it. “All I ever wanted was just to be friends,” he tells Jack.

Later, Rusty asks Provenza and Watson if they would please call over to Kris’s house and say he can’t make it because his threat level – or something – is too high. Provenza won’t do it. “Have you ever had anyone in your life that you cared about just not show up?” he says. “And leave you hanging?” Yeah, he’s got a point.

Meanwhile, Major Crimes pieces together a connection between Browning Security Co. and Javier, who used to work there. Basically, there are too many coincidences, and as it turns out, Browning’s former fiance, Melissa, is buried under the flower bed in Javier’s grandmother’s back yard (hmmm, wonder if grandma knows about that). Javier strangled her, then cut off her finger with the engagement ring on it to give back to Browning, who paid him $10K to do it.

Only Javier replaced the diamonds with fake glass before giving the ring back to Browning. I don’t know if this is worse or better than a gang-related murder. I guess it’s all bad. Anyway, Browning is under arrest for murder, and Javier gets 17 to life.

“Sit. Wait. We’ll get back to you after we burn the Constitution.” – Provenza to Jack, after Jack says he won’t let them trample Javier’s civil rights

“Christ forgives us, Javier, not judges and lawyers. Do you want to get an attorney or do you want to get right with God?” – Raydor, playing the religion card whilst trying to get Javier to talk.

“I just keep thinking how in life we believe one thing and it turns out to be something different … Funny, who we really are always shows up in the end … you know, this might be your out with Kris. Her parents think you’re her boyfriend. But we both know who you really are.” – Jack to Rusty

“What’s that supposed to mean?” – Rusty

“Just that … you’re a material witness in a trial against a serial killer… you play that up with Kris’s parents, and they’ll end the relationship for you.” – Jack

So Jack still hasn’t completely broached the subject that Rusty might be gay. He certainly keeps hinting at it, though.

What was in the envelope that Jack left for Raydor, who ripped it up before even reading it?! What’s that all about?!