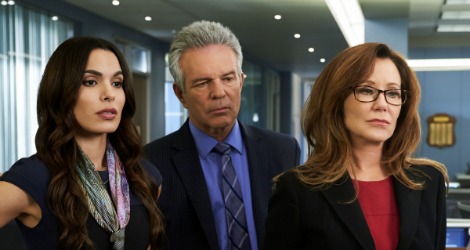 This episode of “Major Crimes” begins with Provenza and Flynn taking a witness named Lloyd Gibbs to a hotel in preparation for his testimony tomorrow. Instead, he ends up becoming the prime suspect in a new murder case.

A convenience store down the street from the motel was robbed last night, and the owner gunned down in cold blood. The cops storm Lloyd’s room and find a gun and lots of cash. Things don’t look good. They don’t look good for DDA Rios either; she’s spent two years getting the case to this point.

But Lloyd says he was with a “friend” from high school who can vouch for him. Her name is Shampagne. With an “S.” She has a website and charges guys $800 an hour just to talk. But “she’s definitely NOT a prostitute,” says Lloyd.

To pursue this further, the Major Crimes crew sets Flynn – a.k.a. “Lance Fontaine” – up on a “date” with Shampagne. When “Lance” and Provenza go to Shampagne’s house, it’s pretty entertaining. She can “talk” with both, but it’ll be twice the cost.

They haul her back to the station, where Tao finds a workaround to access her very glittery phone. In short, he deactivates it, gives it to her, she tries to put the password in, it doesn’t work, and he takes it back and says he’ll fix it. Yeah, I dunno how he hacked into it, but it somehow involved knowing the password she tried to enter.

Anyway, turns out she’s at the heart of this and wanted Lloyd to cop to the crime. Do people not realize that nothing you say at a police station or Major Crimes division is private? Heck, nothing you say ANYwhere is private these days. There are always people listening in. Have these people not watched “Person of Interest”?

Eavesdropping was sort of the order of the day in this episode. Capt. Raydor listened in as Rusty lied to his friend – a girl whom he’d considered asking to the outdoor movies – that Capt. Raydor wouldn’t let him go. I think because maybe he doesn’t want to put the girl in danger. Is that what you took away from that exchange?

Anyway, Provenza lost the bet that Rusty would ask her out, and now he owes Raydor a month of civility. We’ll see how that works out.

Meanwhile, Raydor freaks out a little while eavesdropping on Rusty, and hearing him tell his friend he’s had threats (as in plural) on his life.

And in more non-privacy issues, Provenza accidentally tells the whole Major Crimes division about Flynn’s high blood pressure. And then Flynn faints – just like he did a few weeks ago at his ex-wife’s house while stressed out over his daughter’s upcoming wedding.

It’s enough to get Flynn to actually start taking those blood pressure meds Provenza has been urging him to take. “I take 20 pills a day with three glasses of wine, and look how healthy I am!” says Provenza.

But I’m glad we got to see Provenza try and keep Flynn calm during this episode, which met with hilarious results.