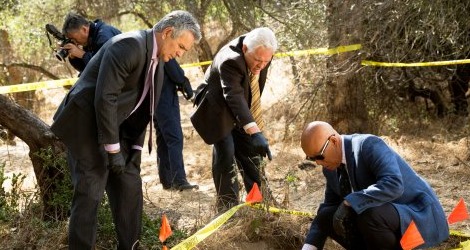 This week’s episode of “Major Crimes” begins with an emergency call about a daughter who hasn’t come home. Her dad told the 911 operator that his daughter was bullied – cornered in a bathroom by guys who told her to take down her pants so they could take pictures. That’s not bullying, says Sykes. That’s sexual battery. Michelle is also transgendered. She used to be Michael.

Michelle’s mom says her husband is overreacting. Which is my first clue that this woman somehow has something to do with the crime. She’s not even freaked out that her daughter is missing, and says they’ve turned their lives upside down to accommodate “that child.” I’m not a violent person, but that statement makes me want to punch this woman in the face.

Clues lead to a kid named Lewis, who goes by the Internet name of “The Tranny Hunter” (who builds their life around such an abhorrent goal?!), and after a chase through his neighborhood, he ends up at Major Crimes.

Meanwhile, Rusty brings his friend Kris to the station, and when Lewis is led through the room, he looks at Rusty and says, “What are you lookin’ at, faggot?” Hmmm… Lewis also tells Capt. Raydor that he likes to stay “as far away from that freak as possible.” Meaning Michelle. Yeah, a real model citizen, that one. And the squad has Lewis on camera at the mall last night, within 15 feet of Michelle.

Meanwhile, Flynn and Provenza search a nearby woods and find a girl’s scrunchy. Sadly, they also find Michelle’s body with a tissue stuffed in her mouth. Whoever put her in the grave didn’t want her to breathe in any dirt. Also, the battery from her cell phone is missing, and the guys conclude that the killer might have been a family member. I’m calling foul on the mom, at this point, but that’s probably too easy.

When Michelle’s brother sees Lewis at the station, he attacks him. But Raydor has issues with charging Lewis, because his behavior is inconsistent with the murder. They video-document the family’s reaction upon hearing the news of Michelle’s death, and the parents argue over her gender identity issues. The dad was accepting; the mom, not so much.

I appreciate that Capt. Raydor tells the squad to identify Michelle as a girl. “It helps me to identify with the victim,” she says.

Jack and Rusty discuss Michelle’s case, and Jack says, “You can’t hide who you are, as I’m sure you know.” “Sure I know what?” says Rusty. “You know … being a foster child,” Jack covers. Turns out that Capt. Raydor had told Jack about Rusty’s history of hustling guys on the street, so Jack could understand him better.

At the station, Raydor listens in as Kris tells Rusty that the last guy she dated ended up being gay. Remember, we had that “is he or isn’t he” discussion a couple of weeks ago. Oh, and Rusty calls DDA Rios “Creepy Emma” when he introduces her to Kris. She IS a little creepy. And what does she eve do around there? She can’t even look at a body without nearly passing out. She’s just annoying. I had to laugh when Provenza told her to grow up and get a spine, or whatever words he used.

At this point, Raydor seems to think Michelle’s dad is her killer. She lets him go see Michelle’s body at the morgue, and is grief-stricken when the medical examiner tells him, “Her head was crushed in with a baseball bat.”

Turns out the dad rented an apartment. He’d planned to establish residency so Michelle could go to school in that area. He also took $80,000 out of their joint account, “for Michelle.”

Raydor and Provenza then question the mom about the shovel in the trunk of her car, as well as her shoes, both of which have the same dirt that was in Michelle’s grave. “Mrs. Grant, we have arrived at that point in our relationship where the lying has to end,” says Provenza. “I’m a good mother,” she says. “And I want a lawyer.”

She’ll need one, because she’s now under arrest for Michelle’s murder.

Evidence leads to the fact that Michelle’s brother picked her up at the mall, and then killed her after she told him about the new apartment and school. “She was destroying our family!” he yelled. “It’s been like living in an insane asylum ever since she was born.”

After he killed Michelle, he went home and told his mom, who then buried the body. Talk about a seriously dysfunctional family. Oh, and Lewis gets justice, too. “These pictures prove that you committed sexual battery, which is enough to put you away in juvie,” says Sanchez. “Have a miserable life.”

By the way, I love Tom Berenger in the role of Jack. And I love his character, too, especially when he comes up with the idea to take Capt. Raydor, Rusty and Kris to the outdoor movie “Shakespeare in Love.” He seems like a good guy, if a little lost and misguided.