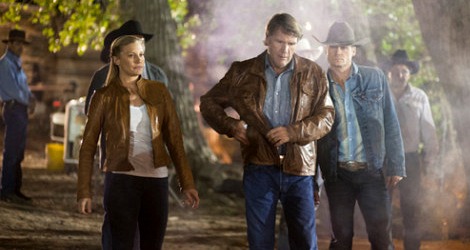 I apologize for missing last week’s recap of “Longmire.” The Fourth of July holiday, housesitting, babysitting, and dogsitting all got in the way. But I’m back and I have to say I rather enjoyed this week’s episode. Viewers got to see more of the cowboy side of the sheriff in this ep.

We find Walt more than annoyed as he sits in his truck waiting for Branch to assist in repossessing property from a local man named Travis. Branch has conveniently called out sick as it looks bad during an election year to repossess anything from legitimate voters. Before Walt can take possessions of Travis’ trailer, Ferg calls him about a horse running rampant amongst some farmland. Walt puts a boot on the trailer and is set on having Branch deal with it.

Walt calls in Henry to help with herding the horse. Showing off his cowboy skills, the Sheriff lassos the horse as he stares it down with it angling toward him. The horse is dragging a body which Henry cuts loose. The body has a bullet through his neck so it’s unlikely the horse is the prime suspect in this week’s murder case. We find out later the victim is a foreman named Titus.

The horse looks to be wild, according to Walt, as it lacks shoes, yet the saddle on him is very impressive and has a mark imprinted on it. Henry and Walt follow a trail back to an abandoned rodeo, an underground rodeo circuit has come to Absaroka County.

Branch reluctantly goes out to Travis’, set on repossessing the trailer. When Travis sees Branch, he’s relieved to see his old school buddy. Apparently, they were on the football team and spent a few of the younger days riding the rodeo circuit. Branch grew up and decided to get a real job, though Travis has tried to stay afloat riding the circuit. With a soft heart and an ulterior motive, Branch offers to loan him the cash to get his trailer out of repossession, as long as Travis lets him know about the next underground rodeo. Travis takes the check. Walt, Branch, and Vic show up at an illegal rodeo (courtesy of Branch’s “sources”). They’re dressed in plain clothes and Walt is without his trademark hat, but it’s unlikely these three will make it successfully undercover as everyone in the county knows their faces, especially Branch, as his face is plastered on election billboards all over the county.

Vic sweet talks some rodeo performer after she notices his leather holster has the same imprint as the saddle on the horse. She gets a name, Javier Hemendez. Walt has stumbled upon Bob, our resident rodeo clown and town drunk. Turns out he was at the rodeo a few nights before and tells him about one of the performers getting shot in the face. Bob suggests Walt talk to rodeo doc. The festivities quickly end when Branch is made by some bookies he is trying to infiltrate. Once everyone hears the “policia’ are there, the crowds quickly dissipate.

The team tracks down the rodeo doc, a medical student practicing medicine without a license. Walt questions him about the man who was shot in the face, Javier Hemendez. The med student tells him he wanted to take the guy to the hospital, but Titus paid him off handsomely not to. Turns out Titus was the one organizing all these underground rodeos.

Ferg gets a call from the bank and informs Walt that Travis’ trailer hasn’t been repossessed yet and he has missed his payment again. Branch is dumbfounded. What did Travis do with that money he loaned him? Branch is over it, but Walt is livid and tells Branch if he wants to be sheriff he can go take possession of that trailer. In any case, Walt sends Vic with him to make sure he gets the deed done. Meanwhile, Walt and Ferg, with help from Bob, find a makeshift camp of all the illegals that were working on the ranch. They had all taken off in the middle of the night in fear of being deported. They track down Javier and question him. Turns out they left their homes in Mexico with the promise of starting a new and better life in Wyoming, but when they got there, the promises of green cards and wealth were empty ones.

To keep them somewhat enslaved, they split up their families and sent them to work on different ranches. Turns out Titus was more of saint than a sinner as he ran the illegal rodeos to make money that he split amongst the workers. He was about to blow the whistle on the company enslaving them as well.

Over at the Red Pony, Detective Fales shows up unexpectedly, like that zit that appears on your face out of nowhere just as you’re readying for a big date. Henry wants to pop Fales like you want to pop that zit, but he tries to remain calm. We see in flashback snippets what happened in Denver. Walt shows up at Henry’s motel room, his back slashed up and bloody. Henry takes him to Ada Black Kettle, an old Indian healer he knows. She patches him up.

When Branch goes back out to take possession of Travis’ trailer, Travis pulls a gun on him. Luckily, Vic is there and pulls her gun on Travis. Travis relinquishes his gun but not before Branch coldcocks him. Over at the sheriff’s office, with Travis in jail, they find out that Travis used the money to pay off a gambling debt he made at the illegal rodeo, the night Javier was shot. He tells them Cal, one of Titus’ employees, his family used to own that property.

This sheds a whole new light on the case. They had questioned Cal earlier but he seemed innocent enough (don’t they always?). Walt shows up with the wild horse from the beginning and a lasso in his hand. As Cal sees the horse and steps onto the porch, Walt, with his magnificent lassoing skills, ropes Cal’s foot and hog ties his legs so he can’t go anywhere. The other end of the rope is attached to the horse which Vic is not successfully keeping calm.

Cal confesses everything to Walt – how he was angry with Titus for giving the workers money but not him. He just wanted his fair share. When he asked Titus for it and he said no, Cal just lost it.  Once he confesses, Walt cuts him loose, much to Vic’s relief as she was having a hard time restraining the horse.

Over in Denver, Henry is talking to Ada, telling her that someone may come to question her about the night he showed up with Walt and she stitched him up. He asks her if she remembers that night and she shakes her head “no,” but then grins at Henry.

The episode ends with Walt taking the horse out to an open field to set it free. He has a soft spot with animals (PETA should have him as a spokesperson) as we witnessed in last season’s “A Damn Shame” episode.

With the trauma it experienced, it is unlikely the horse will ever take on another rider. The horse starts to run away but pauses and looks back at Walt. Eventually, the horse returns to Walt’s side.  Hey, even the horse knows a good looking cowboy when it sees one.

Robert Taylor was so adept at his lassoing skills, writer Sarah Nicole Jones had this to say: “I don’t know how much experience Robert has with horses, but I can tell you that his lassoing skills are pretty impressive. In between takes, Robert was always practicing, you could see him off to the side, winding up and taking shots with the rope. I’m fairly certain he even lassoed a few of the crew and cast members.”

I wouldn’t mind being tied up by Taylor. 😀