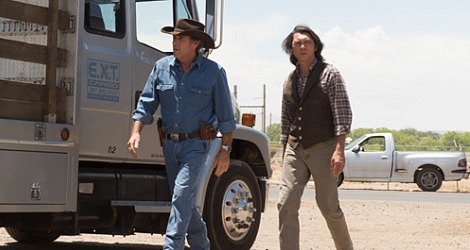 This week’s episode of “Longmire” finds Longmire’s best friend, Henry, caught in a murder-for-hire plot. After Henry overhears a customer soliciting another to kill his wife, Henry confronts him later in the parking lot to offer up his services. His reasoning? To help Longmire stop a potential murder before it happens.

The team sets up a wiretap on Henry’s phone to record all the incoming calls as the unknown customer is to call Henry with further instructions. When Longmire questions Henry to find out if anyone else saw these two, Henry reveals that Cady has been moonlighting at the bar and she saw them.

The team tracks down the wife, and Branch is sent to guard her, which he’s okay with since she’s very attractive. After all the complaining he does over Longmire giving him the “unglamorous” jobs, this is one he’s happy to do.

When the husband (who was trying to hire someone to kill his wife) is found dead, the team is thrown for a loop and start to look at the wife as a prime suspect.

The bigger story is the ongo ing one delving into Vic’s past. In the midst of investigating the murder plot, Vic happens upon Ed Gorski (played by “Oz’s” Lee Tergesen). Gorski is a former Philadelphia police offer and somehow entangled in Vic’s past and possibly one of the reasons she left the east coast.

Whatever happened back in Philadelphia, it was enough for Internal Affairs to start an investigation on Vic. She’s is not happy to see him, but she makes nice even though she looks like she wants to turn tail and run. Ed tells Vic to call him at the RV park he’s staying at with his wife so they can hook up for drinks, but when she later calls, she’s more than a little disturbed there’s no record of Ed Gorski checking in. Production has affectionately given Lee Tergesen a nickname – The Terg. I guess this means we’ll be seeing more of Tergesen in future episodes of “Longmire.” Can’t wait to see The Terg and The Ferg interact! It was nice to see “Space: Above and Beyond’s” Rodney Rowland back on screen as the husband’s lawyer.

I think they need to get rid of the character of Deena, Henry’s on-again, off-again love interest.  She serves absolutely no purpose and takes screentime away from The Ferg and Branch, in my opinion.