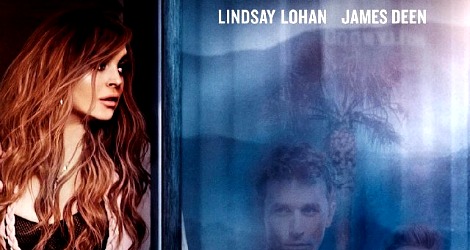 Lohan could not attend the premiere since she was in rehab but standing in was her mother Dina Lohan, who walked the red carpet and posed for photographers in front of “The Canyons” poster, which features a sexy image of her daughter.

“The Canyons” screenplay is by Bret Easton Ellis, who is most famous for “American Psycho,” which he wrote in 1991. What Ellis writes about, said the director, “is beautiful people doing bad things in nice rooms.”

Kickstarter financed the film, which cost a paltry $250,000. Schrader said if it had been a studio film they wouldn’t have let him cast either Lohan or Deen. “And secondly, we would have maybe had to change the story in some way to make it appear more hopeful or the characters appear more sympathetic, and that’s not Bret’s work.”

The film is set mainly in a swanky hillside Malibu pad owned by Christian (Deen), a narcissistic, conceited and spoiled trust fund baby, who tries to control and manipulate his girlfriend, Tara (Lohan). Tara, who is an emotional wreck, is in love with another man, an aspiring actor (Nolan Gerard Funk), and Christian, who is a psychopath, is obsessed and spying on them.

Christian is also a sex addict and has a compulsion for hook ups with men and couples he arranges for him and Tara through Internet apps. Lohan, who is voluptuous and bosomy, goes topless in the many sex scenes that involve men and couples. It’s kind of shocking to see how far the former Disney princess has come since “The Parent Trap” and “Mean Girls.”

There are many close-ups of Lohan where her face looks puffy, but she’s still beautiful and the camera loves her. And she gets to show some emotional range, which shows she can still act.

Schrader told me at the reception that Lohan did her own makeup. She tried to cover her freckles, which Schrader said he loved, and she lined her cat eyes in dark black. She also chose her own wardrobe, and wore, the director said, Spanx.

Schrader laughed that whenever he made a wardrobe suggestion to her, she would do the opposite. In one scene set by the swimming pool where she was to sit on a red chair, he asked her to wear a white bathing suit. Instead she turned up in a red suit to make sure she would be the center of attention.

Schrader, whose directing credits include “American Gigolo,” “Auto Focus” and the screenplay for “Taxi Driver,” sang the praises of his star. He said the 27-year-old  “has moved out of her ingénue phase.” He compared Lohan to 60’s sex icons Angie Dickinson, Gena Rowlands and Ann-Margret. “I think she actually wears this phase of her career quite well.”

The director, whose next film will star Nicolas Cage, admits Lohan’s reputation for being unreliable has hurt her career. “People want to hire her. She’s awfully talented and charismatic,” he said, but “reliability’s the issue.”

Schrader also said that despite the challenges in working with her, the end results made it worth it. “You say to yourself, why am I going through all of this? And then I look at the monitor and I go, ‘Oh that’s why.” He added, “I would work with her again in a heartbeat.”

Schrader summed up Lohan’s appeal. “Certain people have the ability to kind of mesmerize us and keep us watching them,” he said. “She is magic. You can shoot around bad behavior but you can’t shoot around lack of charisma.”