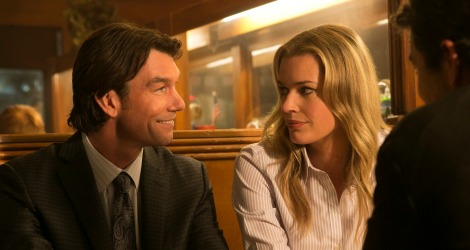 While not exactly on par with Edward Snowden or Wikileaks, tonight’s episode of “King & Maxwell” revolved around stealing secrets. The episode title is a dead giveaway.

The ep starts with Sean and Michelle listening to “Sister Christian” on the radio while sitting in the car on a stakeout. I didn’t really get what the stakeout was about, but the important thing is we learned that Sean “became a man” to this song at some point in the distant past.

The case involves a congressman named Brady Ritter (Jeff Hephner, Ben Zajac on “Boss,” Matt Ramsey on “The O.C.”), whose father Clyde Ritter is the politician that died on Sean’s watch. Brady needs their help with “Madame Beltway,” a journalist who’s dragging his family through the mud. Michelle notes that quieting journalists isn’t really their beat, but Brady says just find out who she is and they’ll go from there.

Edgar’s super-amazing skills immediately come into play when he figures out what server Madame’s blog is on — the Washington Server Center. But he won’t hack into it, because “it’s against the law, Sean.” Oh that Edgar. He’s so lawful, which is a real problem for the renegade King & Maxwell.

Anyway, they decide to do things the old fashioned way – go to the server’s office and pose as computer technicians. Ok, call me crazy, but wouldn’t a computer server have their own technicians? The girl at the front desk is seriously gullible.

Meanwhile, Sean goes by Ritter’s campaign office, where he gets some flack for his history with Clyde Ritter. In fact, Sean blanks out a little when he sees a picture of Brady and his dad … on the day he was assassinated on Sean’s watch.

Michelle goes to find Madame Beltway, who they’ve determined is a fairly benign looking girl named Angela Miller. And Sean goes to see Benny (Dichen Lachman, who played Priya on “Dollhouse” and Suren on “Being Human”). “I need a favor from someone who looks … like a criminal,” he says. He and Benny go to a diner where Angela is sitting (yeah, this all came together super fast) and start talking loudly about the politician’s faulty tax returns – all of which are “ON THIS PHONE,” Sean says loudly. They stage a spill and ditch the phone, which Angela picks up.

The Clyde Ritter case is big on Sean’s mind. He’s back at the office scribbling notes on a board. “What if Clyde Ritter wasn’t killed by a lone gunman?” he ponders. “What if the same people who assassinated Clyde Ritter are now character assassinating his son…?”

Angela turns up dead when Sean and Michelle track her, and WHY DIDN’T YOU GO AFTER THE SHOOTER? (I said loudly to myself.) They got there, like, seconds after shots were fired.

Anyway, here’s the scene in the episode where Rigby shows up and is annoying.

Meanwhile, Edgar figures out that Angela and her source shared the same email account, but communicated through email drafts. The emails apparently weren’t sent.

And what?! A private eye named Jerry enters the picture here. Of course, it’s Jerry O’Connell, Rebecca Romijn’s real-life husband. And they play up that fact for all it’s worth. He immediately makes a play for Michelle. “You’re a sexy man, Jerry,” she says. “Not sure how I keep my hands off of you.” Because in real life, she doesn’t, of course.

Turns out he’s the one sharing the draft emails, but he’s just a middle man, he says. They tell him to hand over his envelope so he can slip out the back, because, uh, the place is bugged by the FBI!

In the envelope is opposition research. News Flash (not): politicians pay people to dig up dirt on their opponents. Sean suggests to Brady that it’s bigger than one blogger. Maybe it goes all the way to the White House. Maybe it’s all connected to his dad’s murder.

Back at the office, Sean is super happy to think he hacked into the Beltway’s email. And then later is crestfallen to learn that Edgar actually hacked into her email, and Sean only got the info off the browser.

Let’s see … there’s also a poker dealer named Jose, and we learn that Michelle is a skilled poker player. Is there anything this girl can’t do? Oh, I forgot to mention that Sean got beat up by the thug outside the poker game so Michelle could slip in and join the game.

Things end with King & Maxwell at D.C. Central, where Michelle gets slugged in the face by a guy with a knife and then follows him into the bathroom. She takes him down, but he grabs a hostage and puts the knife to her throat. (Note to self: check public bathrooms before going all the way in.)

Sean comes in and grabs a mop as Michelle gives the killer a swift kick. It all goes back to a guy named Kurt; an ex-con that Brady lobbied the government to have pardoned. Brady’s chief of staff, Peter, and Peter’s wife, Donna (Sarah-Jane Redmond, Nell Potter on “Smallville” and Rebecca Thatcher on “Kyle XY”), were the ones behind the secrets. Peter wanted to run for office.

That was a long, round-about way of getting from there to here!

Things end with Sean meeting with Bob Scott (Martin Donovan, Ezra Stone on “Boss” and Peter Scottson on “Weeds”), another guy who was there the night Clyde Ritter was shot. Sean learns that Bob was distracted by a voice in his earpiece just as the shots were fired. That, along with Sean being blinded by something other than sunlight, thickens this plot up nicely.

“That’s not the work of a lone gunman,” says Sean. That’s a conspiracy … who wanted Clyde Ritter dead?”

“I have a plan you’re going to love.” – Michelle
“Whenever she says that, there is nothing about her plan I’m going to love. Nothing.” – Sean

“Name one time when you’ve walked away from a challenge.” – Sean
“Every time I watch you flirt. I resist teaching you how to do it.” – Michelle

“If you decide to get handsy, I will break your hand.” Michelle to Jerry, who says he needs to pat her down

“No way, Jose.” – Edgar, as Jose leaves the car and runs into D.C. Central