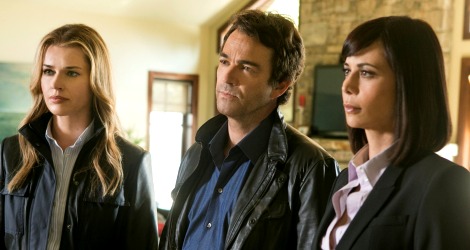 One of the things I love about “King & Maxwell” are the little opening scenes that tell us these two don’t play by the rules. I try not to play by the rules either, so they’re my kind of people.

Meanwhile, Rigby calls in Sean and Michelle on an FBI kidnapping case. “Sometimes the Bureau’s rules and procedures leave my hands tied,” he says. “You two are able to kick in doors.” Yeah, that’s a fact.

When they gather at the Allen family’s home to go over the details of the kidnapped child, an old flame of Sean’s is there. He and Joan Dillinger (Catherine Bell) are former coworkers, and she ran the New York field office. She’s there to help facilitate the transfer of funds.

Michelle immediately picks up that they’re not just acquaintances. “Shot in the dark? You guys took a yoga class together,” she tells Sean.

Michelle calls Edgar and tells him to meet her at the Allen house. Edgar is really coming in handy on these cases. He’s able to round up all the digital video files that occurred in the park where 13-year-old Noah was kidnapped — including THE video showing Noah being nabbed and put into a car. Hmmm … people say we’re too connected to our devices, but something like this shows how life-saving that trend can be.

Thanks to a telltale tattoo, Michelle and Sean are able to nab the kidnapper. He says he doesn’t know who he was working for. He was just doing a job.

At this point, I start to wonder whether one or both of the parents are involved. The mom is, but not in the way I think. We learn that she cried after her other son’s karate class — hours BEFORE the kidnapper’s first call to them.

What?! The soccer mom is an art thief! And her former partner who spent 20 years in prison is out for revenge?! This is where the Scooby gang usually pulls the mask off the villain’s head.

Turns out that former partner has her son, and he wants her to steal a $40 million Monet as ransom. “I am not a thief anymore,” she tells Sean and Michelle. “But I will do whatever it takes to save Noah.” Yeah, as a mom I get that. So would I.

And Sean and Michelle are gonna help her steal that Monet painting. Which they do, and then Sean has the brilliant idea to hide in the back of the car when she goes to take the painting to her former partner.

“That’s your plan? There’s no way I’m getting in there with you!” – Michelle

And when they arrive at the airport hangar, the kidnapper tells his thug to check the trunk. Which he does, and no Sean and Michelle in sight.

“I wanna kiss the guy who invented rear folding seats.” – Michelle, as they’re huddled in the car.

“That’s what they were invented for.” – Sean

And yeah, I somehow knew the painting they “stole” was actually a fake. The feds move in, arrest the kidnappers, the mom and son go free, and Sean and Michelle have helped yet more people, though not necessarily by the book.

Oh, and I hope the girl Sean got to do the fake painting sticks around. I like her. She’s a former counterfeiter that Sean put in prison, then got her out in exchange for helping with a case.

The episode ends with Edgar persuading Sean to go back to the scene where his Secret Service charge was assassinated. Something wasn’t right. The lighting was off. Turns out that wasn’t sun coming in the window, throwing Sean off his game. It was light from another source.

“Who wanted you blind, Sean?” Edgar asks. And the plot thickens.

“End of the day, sex with a coworker is like skydiving without a parachute.” – Michelle

“That woman has more attitude than you have excuses to not work out.” – Michelle, on Joan

“I have a knack for getting involved with complicated women.” – Sean