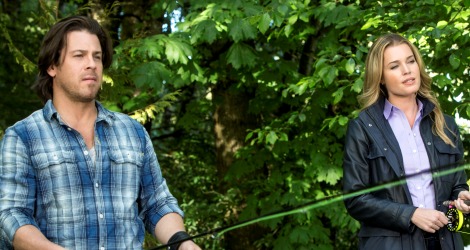 Ok, just a quick note on my “King & Maxwell” recaps. I can’t do straight recaps. There’s SO much that happens in a single episode, that writing a straight recap would be like trying to climb Mt. Everest in one hour. So I’ll hit the highlights and talk about the fun stuff.

And the fun stuff this week is … CHRISTIAN KANE! Eliot Spencer from “Leverage”! See, here’s where I think TNT missed a great opportunity. Why not bring the Eliot Spencer character over and make HIM related to Michelle? Wouldn’t that have been fun? Still, it’s great seeing him on screen again, and I hope they bring him back, even though his character is apparently off to run a swim-up bar in Chile.

The opening bit this week was fun. Sean is taking pictures of a woman meeting a man at a hotel. Sean is all geeked over his new camera, which has such a great lens that he can snap pics as he carries it and the snappee never knows they’re being photographed.

Only in this case, the woman DOES know, so she comes over to get the camera from him, which he doesn’t give up willingly and instead throws to Michelle, as Sean gets the crap beat out of him by an adulteress cage fighter. “I can barely move my hand,” he says back at the office. “Should have read the file,” says Michelle.

J.T. is a former cop who’s now working as a private eye – sort of, really? you have to take an exam for this?! – and tracking a guy named Tommy Smith. The guy who hired J.T. is the dad of Claire Culpepper (Sara Canning, who played Aunt Jenna on “The Vampire Diaries”), who’s in love with Tommy Smith. Only she wants to find him, too, so Sean and Michelle end up working on her behalf (as J.T. gets a lesson in the fact that you can’t work both sides of a missing person’s case – again, really?!).

Or in Michelle’s words to Sean: “Look, I adore my brother but he thinks airbrushing a picture of Sherlock Holmes on the side of a van is all it takes to be a private investigator.”

Anyway, when all is said and done, Tommy Smith is actually in the witness protection program, and Claire and he ride (or fly or whatever) off into the sunset at the end. Now known to them as the Witness Protection Bliss Program.

Stuff we learned in this episode…

J.T. used to make ridiculous sandwiches for Michelle that include everything plus a fried egg – and he makes one for her in this episode. We’ll call it “The J.T. Sandwich.”

Is there a little romance brewing between Benny and Edgar? Or just friendship. That was so sweet when he said he didn’t like to be touched but couldn’t remember why, and she told him to close his eyes and breathe, at which point she held his hand and he was ok with it.

Michelle’s got daddy issues. She didn’t call her dad on his birthday, and in fact, hasn’t spoken to him in two years. Something tells me it’s more than just the fact that he had guys in unmarked cars trail her on dates back when she was in high school. Plus her dad has health issues. Call him, Michelle!

So sweet that Claire and Michelle bonded over Claire’s unwavering love and faith in Tommy.

Michelle’s nickname as a kid was “Little Mick.” After four boys, their parents were sure she was going to be another boy, so they named her Mick. Her dad even wrote it on the birth certificate, but her mom changed the “k” to an “h.” So I’m guessing part of the daddy issues stem from that.

J.T. taking a flying leap off a car and then trying to instruct the guy how to fight. “It’s gotta be fair,” he says.

A Secret Service tip: If you close your eyes and see whatever you’re trying to remember in your peripheral vision, you can remember it.

Michelle calling Sean, and them both saying at the same time, “Tommy Smith is in the Witness Protection Program!” She got it out first, though.

Not too much Rigby in this ep, but he managed to get in one annoyance.

If I’m ever in a perilous situation, I’d like Michelle to stand in front of me and say, “Get behind me.” Actually, I’d like to have her teach ME how to fight.

Sean had a mullet in high school and was the captain of his breakdancing squad.

J.T. and Michelle fighting over pie. Just like a brother and sister.

Jonathan Frakes, a.k.a. Number One, a.k.a. Commander William T. Riker on “Star Trek: The Next Generation,” directed this episode.

Can we get Christian Kane back in a TV series please? Pretty please, TNT?!!