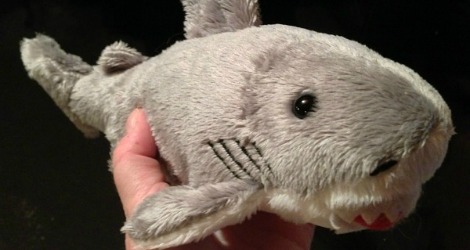 Ok, I’ll admit right off the bat (or perhaps “right off the shark” is more apropos), the title of this entry in our July Giveaway Extravaganza – we’re giving something away Every.Single.Day in July! – is a teensy bit misleading. Just a teensy bit. Also, it’s a press kit, so I’m not allowed to sell it. But I’m pretty sure I’m allowed to give it away. If not, I’m sure Syfy will tell me and then, well, we’ll go to Plan B, which will likely entail me going down to Toys R Us and buying a shark for the lucky winner.

And the fact that I’m giving this prize away to someone means I love you guys – because it’s going to cost more for me to ship this than the DVDs and blu-rays in my other giveaways this month.

Check out the pictures in this post. That’s what I’m giving away. It’s a stuffed shark in a nice package that also includes rough-cut screeners of four Syfy original movies:

1) Leave a comment on this post, telling us why you’d love to win this awesome shark prize.