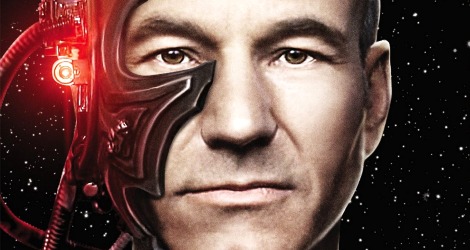 Five days into the July Giveaway Extravaganza — we’re giving something away every single day in July! — and so far, so good. I’ve kept up the pace and think I’ve even spelled “extravaganza” correctly in every giveaway. Let me know if you see where I goofed up.

THE GIVEAWAY: “Star Trek: The Next Generation – The Best of Both Worlds” on Blu-ray ($18 value)

WHAT IT IS: “The Best of Both Worlds” Part 1 and 2 from “Star Trek: The Next Generation” has been fully restored in brilliant 1080p HD and seamlessly edited together into one feature-length presentation. And the crew of the Enterprise is asked: How do you stop an unstoppable foe?

The Enterprise team discovers the devastated remains of a Federation colony as an ambitious young officer joins the crew to confirm the presence of the deadly Borg. Soon after, Borg drones abduct Captain Picard (Patrick Stewart), mutilating him horribly as they assimilate him into their collective. Commander Riker (Jonathan Frakes) must take over as Enterprise captain as Starfleet braces for an all-out battle to defend Earth. But the Borg’s power proves overwhelming, and resistance is futile. Will Riker be forced to destroy his former captain to save Earth and the Federation?

1) Leave a comment on this post, telling us why you’d love to add “Star Trek: The Next Generation – The Best of Both Worlds” blu-ray to your home video collection. Are you a “Star Trek” fan?

#Giveaway! #StarTrek: The Next Generation – The Best of Both Worlds blu-ray @reellifejane http://bit.ly/14TevGS #sweepstakes #contest