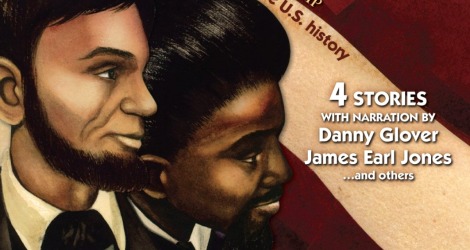 Today’s installment of our July Giveaway Extravaganza — we’re giving something away every single day in July! — is a patriotic DVD from Scholastic Storybook Treasures. Perfect for Independence Day!

THE GIVEAWAY: “Lincoln and Douglas: An American Friendship” on DVD

WHAT IT IS: A read-along DVD for little ones featuring four stories:

1) “The Pilgrims of Plymouth” (written and illustrated by Marcia Sewall). When the Pilgrims set out for America, they brought with them a dream for the future. With hard work they made that dream come true.

2) “John, Paul, George  and Ben” (written and illustrated by Lane Smith, narrated by James Earl Jones).  A humorous and factual history of five lads who grew up to become the Founding Fathers of our country.

3) “The Journey of the One & Only Declaration of Independence” (written by Judith St. George, illustrated by Will Hillenbrand, narrated by Jeff Brooks). This witty, gritty and factual story tells all about the document that has defined American freedom for over two centuries.

4) “Lincoln and Douglas: An American Friendship” (written by Nikki Giovanni, illustrated by Bryan Collier, narrated by Danny Glover). The story of an unusual and historic friendship between two great American leaders – Abraham Lincoln and Frederick Douglass.

The DVD also features an interview with Nikki Giovanni, author of “Lincoln and Douglas: An American Friendship,” as well as discussion questions.

1) Leave a comment on this post, telling us why you’d love to add the “Lincoln and Douglas: An American Friendship” DVD to your home video collection.