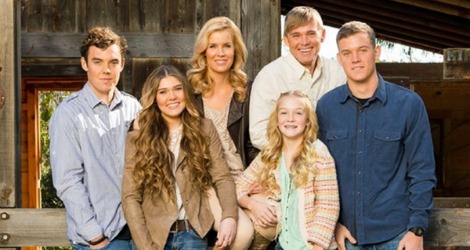 If you’re old enough, you’ll remember little Ricky Schroder on the TV show, “Silver Spoons,” or in the film, “The Champ,” with Jon Voight and Faye Dunaway. Now 43, Schroder is not only an actor, but also a writer and director. One of his recent projects as writer, director, and actor involved every member of his immediate family either on camera or behind the scenes. In fact, the star of the film, “Our Wild Hearts,” is his daughter, Cambrie.

Ricky plays a cowboy who discovers that he has a teenage daughter, Willow, when she seeks out the father she has never known. The two become entangled with the fate of a wild horse and develop a relationship with one another in the process. It’s a heartwarming film that’s appropriate for both kids and adults. It premiered on the Hallmark Channel in March and becomes available July 9, 2013 on DVD and VOD.

Usually, interviews are conducted with a public relations rep on the line, but Ricky called me from his house without anyone else listening in. We had a very relaxed chat about his experience working with his family and his future career plans.

Tell me how the “Our Wild Hearts” story came about.

We’ve always been fans of wild mustangs, wild stallions, and horses. They’re such an important part of America’s culture and west. They pulled the pioneers’ wagons, they plowed their fields, and they’re in jeopardy. And it’s something that my wife and I and my daughter feel passionate about.

My daughter has also wanted to be a performer since she was six years old, and we’ve held her back because we didn’t want to choose that life for her and for the other kids. And it came to a point where we just thought, ‘Wow, it would just be fun to work together as a family and do a project, a new adventure.’ And I said, ‘Well, Cambrie and Andrea [Ricky’s wife], why don’t you guys think about it and come back to me with an idea of something that you like.’ And they came up with ‘Old Wild Hearts,’ and they pitched it to me. I said, ‘It’s really good.’

So, I sat down, and a month later, I was done with the first draft of the script. And my wife helped with a lot of the female dialogue and a lot of the relationship between Willow and her mother…. It was just such a great, great experience. I would love to do it again. I don’t know if we’ll ever get the chance to do it again like that, but it was a great time. My family got to know me better and what Dad does and understand me in a way, and I got to know them better in a way.

How does it differ working with your family like that on the set?

On set, it was actually no different than working with other professionals. I didn’t treat them like kids, and they didn’t treat me like Dad. They were members of the crew and members of the cast. We had a job to do, and the stakes were high and a lot counting on it. I treated Cambrie as I would any actress, which is with respect, but I demand that they give their best every day. And she did; she rose to the challenge. And I got to know my daughter in a way which I’ve never known her. It was really cool because the movie was about a dad and a daughter getting to know each other, and we actually did get to know each other better through the process.

Did you expect that?

So, the challenge was my wife and I, when we had a disagreement a couple of times, I’d come home after being at the editing all day or she’d come home, and I’d see that we were just sort of quiet. One of us was pouting. So, we had to work through that. When you work with other people and you’re the director, typically when it’s not family, people don’t take it like that. It’s a professional relationship. But my wife and I? Well, I sleep with her! [Laughter]

Does your daughter, Cambrie, want to pursue acting now?

She wants to pursue it, but I think in a cautious and conservative way. She’s enjoying her high school life, and she’s on the swim team and got her own social life. She’s not ready to sign up to a performing arts school in Manhattan and she’s not ready to try to get a series or anything. She’s definitely interested in pursuing it more, but I think she’s patient, which I like.

Because of your life as a child actor, is that one of the reasons why you were cautious about your kids getting into the business too soon?

Absolutely! I have no regrets for myself, but I didn’t want to choose. Not only is the child performer’s life impacted, but all the kids in the family and the mom and the dad and everybody who supports that child performer is impacted. It takes so much time. Can you imagine if you’re a family and all of a sudden, there’s one sibling in the family who gets a job in Toronto for three months? It just turns the whole family upside down. We just didn’t want that for our children.

I read an old interview with you about how you got into riding horses through doing “Lonesome Dove.” Is that correct?

That’s right because I was not a country boy. “Lonesome Dove” when I was 18 exposed me to western culture, western lifestyle, cowboys, horses. I just fell in love with the whole landscape, and I actually moved to Colorado for about eight years and lived on a ranch after that and had kids there. I was a dad at 21, so it was a great time in our lives to be in the west and raising kids. My daughters love horses, and they’ve ridden since they were little. They do the Hunter jumpers. I’ve only ridden western my whole life. But the wild mustangs of America, they’re so symbolic of a time when America was new and young, and they just deserve a place in America’s landscape. We wanted to bring attention to that, too – in a lighthearted way; we wouldn’t want to pound people over the head with it.

I thought you handled that well, showing both sides of the issue. How was it working with the horses? I know you did “Lonesome Dove,” but in this, you’re in a situation where a horse has to appear dangerous.

First of all, horses are dangerous. They don’t mean to be, but they are large and they are explosive when they’re scared. So, you have to always remember that when you’re around them. They’re a prey animal, and they think everything in the world wants to eat them. So, they can just jump out of nowhere. Tommy, the horse we had – he was very well-trained, and the trainers were top-notch. We had great stunt people, so we never had any dangerous accidents, thank goodness. But I remember my daughter being on the horse as it would rear or something like that. As a director, you care very much about your cast and your crew, but I found myself feeling like a dad in those moments. I was just sort of wanting my daughter off that horse, and my director head would come back and say, “But you need the shot.”

Was your daughter afraid?

No, she was more excited.

I looked at your IMDB page, and I saw something called “Starting Strong.”

It’s a reality TV show I produced in partnership with the United States Army, and it’s actually running now on Fox on Sunday mornings and also got big distribution digitally on the Army’s YouTube channel. I’m very proud of it, too. It’s really a cool program. You take a civilian into the Army for a week, and you show them what it’s like to do a specific job in the Army or what’s otherwise in the Army known as a military occupational specialty or MLS. So, we cover things like engineer, combat medic, aviation mechanic, and at the end of the week, the young man or woman that’s been embedded with the Army in that job makes a real decision to invest in the Army or not. It’s not fluff. They get a real taste of it. Hence, the viewer does, too, through that character.

That sounds fascinating. Do you have any new projects coming up that you can talk about? Are you planning to do more directing and writing?

Oh, yeah, as well as acting…. I’m thinking of writing a sequel to “Our Wild Hearts,” and the Army’s interested in perhaps having me produce more “Starting Strong.” If you want to see it, just go to the Army’s YouTube channel. But as far as right now, I’m just going to enjoy a few weeks, maybe even a month, with my family and enjoy the summer before the kids go back to school…. Just going to take time to reflect a little bit at this point in my life, see what opportunities I have and see where I want to go and come up with a plan.