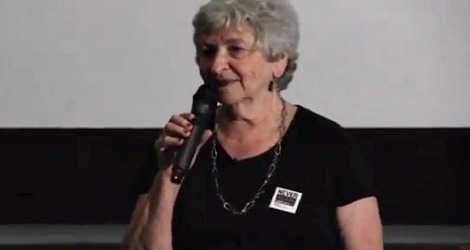 The documentary, “Nicky’s Family,” tells the remarkable story of Sir Nicholas Winton, who saved 669 children in 1939, getting them out of the then Nazi-occupied Czech Republic before World War II broke out. For many of those children, it was the last time they ever saw their parents, who were later killed (many in concentration camps like Auschwitz). Read my companion story about the documentary.

Eva Paddock, who now lives in Boston, was one of those children. At the tender age of 3-1/2, she and her 6-year-old sister were separated from their parents and put on a train to England. (Eva was not interviewed in the documentary, but her sister is in the film.)

Watch the video below in which Winton meets some of the people he saved for the first time, including Eva’s sister. (Grab some tissues first, though.)

I spoke on the phone with Eva about this heartwarming story. Because she was so young in 1939, she remembers little about the journey itself.

In 2009, some of “Nicky’s family” took the journey again, which was especially arranged for them on the very same steam train. “There, I met someone who remembered me from the 1939 trip and that she had traveled with me in the same compartment,” Eva said.

“So, she told me a little bit about what I didn’t know about myself, which was very interesting. I didn’t cry. I was very stoic…. Obviously, a 3-1/2-year-old is quite severely traumatized by being dislocated like that, put on a train, sent away by the mother without really understanding why your mother would send you away. I think these things have a long-lasting effect that many don’t resolve until much later in life.”

Eva and her sister were luckier than most of Nicky’s family, however. “My sister and I were one of the very few children who were sent on the transport who did get reunited with their parents…. My father and mother both escaped in various ways,” she said.

“My father, because he was targeted by the Gestapo, escaped before us. He left on March 15th, and my mother, through very unusual means, was allowed out by the Nazis in 1940 via Norway. And we were reunited in England in the town that our foster parents were in,” she said. “Then, we all ended up living in that same town and kept a relationship with the [foster family] for the rest of their lives. We were very, very fortunate.”

Eva’s father was targeted by the Gestapo because he had been instrumental in helping banned author Thomas Mann get a Czech passport so that he could leave Switzerland, where he was in exile, and travel to the U.S., where he later taught at Princeton University.  This is documented in Mann’s diaries.

Eva’s sister, who lives in England, has had a chance to spend considerable time with Winton and even celebrated his 104th birthday with him in May. He recently broke his hip but was able to walk again quickly. “His longevity and his energy are quite unusual,” Eva told me. Below is a video of CNN’s tribute to Winton on the occasion of his 104th birthday.

When Eva and her husband traveled to England, they phoned Winton’s home and asked if they could come by for five minutes to meet him. Winton’s wife, who has since passed away, said, “No, no, no, nobody comes for five minutes! You come for the day!”

“They were very sensitive to what it really meant to meet this person,” Eva said. This is especially true since none of them had any idea who had master-minded their transport out of the Czech Republic until the story came out in England in the 1980’s.

Not all of the children Winton had planned to transport got out before the war broke out, so some degree of survivor’s guilt is unavoidable for Eva and her sister. “There’s always the question of ‘Why us?'” she said.

In the video that follows, Eva takes questions at a screening of the film in Boston and elaborates on the story further. It’s fascinating stuff.

“Nicky’s Family” opens in Los Angeles and New York on July 19, 2013, and I cannot recommend it to you enough. It is one of the most moving and inspiring stories I have ever heard.