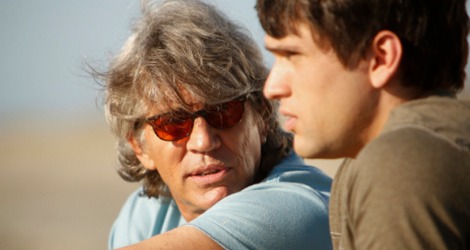 You know you’re getting old when Eric Roberts is playing a grandfather in one movie and a husband in another movie called “The Hot Flashes,” in which Brooke Shields, Darryl Hannah, Virginia Madsen, Camryn Manheim, and Wanda Sykes play the next generation’s “golden girls.” Yikes! Hand me my walker, would ya?

While “The Hot Flashes,” opening in theaters July 12, looks like a very funny movie about a middle-aged women’s basketball team, “The Perfect Summer” is a story about a young man (played by Adam Horner) who learns about relationships from his newly discovered grandfather, played by Roberts. It also stars former “American Idol” contestant, Jason Castro, and airs July 13 and 14, 2013 at 7 p.m., 9 p.m. and 11 p.m. on UP-TV.

I had a jovial conversation with Roberts on the phone (during which he called me “Doll” and caused me to swoon a little) about his unusual role as good guy Lou in “The Perfect Summer.”

I’m a bit distraught that you’re playing a grandfather. I don’t see you that way!

[Laughter] Well, he’s a groovy grandfather if that makes a difference. I’m [playing] an anti-hero. I’m a retired world champion long-board surfer, so I’m kinda cool and kinda hip. It’s a story about coming of age basically, and my grandson is having difficulty fitting in with his peers. So, I tell him, “You need to learn to surf, dude.” And he’s like, “What do you mean?” And I say, “It’s a social entree. You need to learn to surf. Come on!” Then, we start learning to surf, and he’s like, “This is hard.” And I’m like, “Just stay with it, pal.”

We have some experiences together where he accepts my teachings, and he becomes a pretty good surfer…. And he becomes proud that when you really attempt to do something that you can’t do and you overcome not being able to do it, how it makes you feel and how it can launch your life in the right direction….

Do you actually surf in the film?

No, but I had a great stunt double who’s number 3 in the world in long-board, and he made me look great.

I have never surfed. Even getting up on the board in the water, it’s tough! It’s not fun until you know how to do it.

What attracted you to this script?

Tell me about working with Jason Castro of “American Idol.”

It was just wonderful working with him. And six degrees of separation, my wife, Eliza, is his acting coach. So, that was kind of cool. And also six degrees of separation, my stepson, Keaton Simons, plays [music] with Jason. They both have songs in this movie. Keaton is a great singer/songwriter. He’s got an album that just dropped. Go to my website, EricRobertsactor.com, and there’s a link to Keaton. Listen to his music; it’ll blow your mind. He and Jason are really close. It’s funny, huh? It was all just circumstance. There was no aiming for this; it just happened this way.

What about Adam Horner?

Adam Horner is a love, the sweetest boy. What you see is what you get, and he’s basically playing himself in this…. He had to learn how to surf a little bit, and it was hard. It takes months to learn to surf, and he took days. But he got where he could get up on a board.

How close is the character of Lou to you?

I’d say after turning 50, we’re very much alike in that I don’t have anything that I have to prove anymore. I go through life now reaching out to people because I think that’s a natural way to live. After you turn 50, you stop holding yourself in such esteem. You start realizing that there’s a lot of great people out there, and it isn’t all about me. You start to get off of your own self-promotion, and you start to realize you can help other people. And it’s a much better feeling than helping oneself. In that respect, we’re very much alike.

Are there any other projects you can talk about?

There’s a movie coming out of Europe that I’m very proud of called “The Child.” It’s based on a true story about a kid … who was in the hospital, and as he was coming out of the anesthesia, he heard a guy next to him giving a confession to this priest. When he came out of the anesthesia, he thought it was him. He thought that all the things the guy said had happened to him personally. So, he told the nurse that he knew where some dead bodies were…. It’s a very good movie, and I shot that in Berlin.