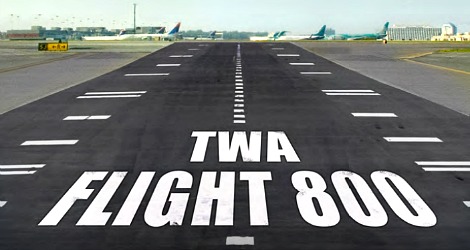 The compelling if flawed documentary “TWA Flight 800” (airing July 17 at 8 p.m. on premium TV network EPIX) explores questions surrounding the cause of the crash of TWA Flight 800, one of the most controversial air disasters of all time. The Paris-bound 747 exploded about 10 miles south of Long Island shortly after taking off from John F. Kennedy International Airport, on July 16, 1996,  killing all 230 aboard.

The official finding, announced by the National Transportation Safety Board four years after the disaster, was that a fuel-air explosion in the plane’s center fuel tank caused the plane to explode. The precise cause of the explosion was indeterminate, but one theory held that a short circuit had ignited the fuel.

The reason this official finding remains problematic to this day is that hundreds — yes hundreds — of unconnected witnesses sprinkled along the coast at dusk reported seeing flares or fireworks ascend to the plane before it exploded. Separately, several witnesses in aircraft or on boats reported seeing something ascend from the ocean towards the aircraft as well. No wonder speculation that a missile or missiles, either by terrorists or friendly fire, had caused the disaster started in the days following the crash.

The speculation has been resuscitated with Kristina Borjesson’s documentary, which relies on a number of individuals involved in the investigation, as well as Tom Stalcup, a self-described “citizen researcher,” who as a Ph.D. candidate, in physics no less, began researching the cause of the crash after seeing a film produced by the Central Intelligence Agency that repeatedly declared that missiles had not caused TWA Flight 800 to explode.

Before I critique the film, I want to note that I agree with the documentary’s goal of reopening the investigation. Too much seems off. I’m not sure we’ll ever know whether the cause of the crash was internal or external, which is the crux of the controversy. At the very least, not knowing what all these witnesses saw in the moments before the plane exploded seems enough to reopen the investigation. There is just too much unexplained phenomena surrounding the crash, and too many concerns from investigators that suggest that evidence was either ignored or not folded into the NTSB’s findings.

As documentaries go, “TWA Flight 800” takes a traditional, talking head approach. We hear eyewitnesses who saw the flare, in exterior settings, presumably where they were standing when they saw the flare, and the tight shots of a stream of participants, individuals who were involved at the highest levels of the investigation. It’s an impressive array that includes retired officials from TWA, the Air Line Pilot Association and the National Transportation board – not the sort that readily espouse conspiracy theories. There is archival news footage, from the network news (Brian Williams looks so young!) and Congressional hearings. There is no narrator. I think this is a film that might have benefited from one.

I have several quibbles with the film’s storytelling, the biggest being that the writers let chronology get the best of them when making a major narrative decision. We don’t meet Stalcup, one of the key players in the story, until about midway through the film. Suddenly, his participation is essential, as he takes the lead on challenging the government’s conclusions.

Not only that, he becomes a character of sorts, so much so that at one point we hear that he took out two student loans so he could take a vacation. (Is this what student loans are for?) He’s fried from his Ph.D. program and his work on the TWA Flight 800. He goes to Cape Cod, where when he’s not surfboarding, he continues to work on the TWA Flight 800. This level of intimacy with someone who had absolutely no connection to the crash is jarring.

It doesn’t end there. Later, we learn that his mother died when he was seven. We don’t learn how. This information illustrates that his life experience makes him especially empathetic to anyone who’s lost someone, including those who lost loved ones on TWA Flight 800. Yet I found it distracting to the point of self-congratulatory. As tragic as this loss is, it’s not on par with losing a loved one in a plane crash that might have been caused by your own government or other forces. I’d have preferred to have heard more from families of those who’d died on the crash. We hear from a French man whose son perished, and then at the end, we get a few snippets. But that’s it. Of course, that might not have been feasible in terms of availability or willingness.

Another quibble: Some of the sessions with witnesses were staged to look like hearings. It took me awhile to understand that these were in fact staged by the filmmakers. I think they should have shot these witnesses in a setting that made clear they were appearing for the benefit of the film, and not some investigative panel.

Such quibbles aside, this film is worth seeing if you’re interested in aviation safety and whether the U.S. government is trustworthy about such things. Big issues, these. From a journalistic standpoint, the film does an excellent job of researching the disaster in a narrow sense. But oddly, it doesn’t contextualize the disaster. There’s no mention of 9/11, and how the investigation might have taken a different turn had it occurred in post 9/11.

And there is also no mention of Pierre Salinger, once of the most vocal critiques of the NTSB findings. Salinger, former press secretary to John F. Kennedy and later an ABC news correspondent, claimed to have evidence that a missile from a U.S. naval vessel caused the crash.

“TWA Flight 800” will air on July 17 at 8 p.m. on premium TV network EPIX. The documentary is also being featured in many film festivals this summer.