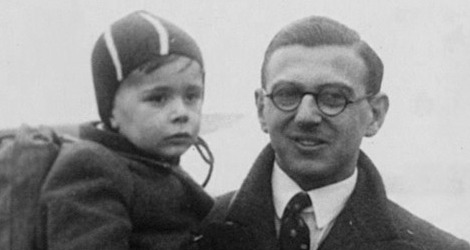 Every once in a while, I get to write about a film that has blown me away. In this case, the story is a true one, and the documentary about it just might be the most moving non-fiction film I have ever seen. I hope everyone has a chance to see “Nicky’s Family,” especially teenagers.

The year was 1939 when a 29-year-old British man joined a friend in Prague, Czech Republic to see if he could help the people there who were being oppressed by the Nazis under Hitler. He found many of the Jews there relegated to refugee camps under horrible conditions. War had not yet broken out, but it was in the air. As people learned of this British man named Nicholas Winton who wanted to help, they showed up at his hotel room door, begging him to help them get out of the country before war broke out. Many had visited consulate after consulate and met with one closed door after another. No one would take in these refugees.

Winton thought they should at least be able to get the children out of the country before it was too late, so he set about trying to find another nation to take them. The U.S. said no, as did most other countries, until finally his own homeland, England, said yes. But there was much red tape to iron out. Winton had to find families for all of the children.

Then, the parents of these children had to part with their little ones, and the children had to travel without their mothers and fathers by train and boat to a new country. Most of them never saw their parents again. The last group of kids was set to leave just as the war broke out, and the trip was cancelled. Almost none of those children are believed to have survived.

Until the 1980s, the children, now adults of course, had no idea who was responsible for saving their lives. Now, more than 200 of the 669 total have been found, and the story has been told. An exceptionally humble man, Nicholas Winton, now 104 years old, kept it a secret even from his wife for many years until she found his scrapbook in the attic with photos of the children. Since the story has come out, Winton has been knighted by the Queen and dubbed the “British Schindler.”

The documentary chronicles the details of the story – there is much more than I have outlined here – and provides interviews with some of the people Nicholas saved, as well as some well-done reenactments of what transpired in 1939. There is also some remarkable archival footage of the refugee camps and chilling propaganda films praising Hitler. There’s even a real-life story about a beautiful spy.

The descendants of the saved children now number more than 5,700, and some of them have done wonderful things for humanity. Winton’s story is now told in schools, and he sometimes visits the schools to inspire the new generation to make a difference. “Nicky’s Family” shows the great impact that one person can have on the world if he or she chooses to take action. Winton’s motto is, “If something isn’t blatantly impossible, there must be a way of doing it.”

This extraordinary story is very well told in the documentary, which was made by filmmakers Matej Mináč and Patrik Pašš. Narration is frequently provided by Joe Schlesinger, one of the children who was saved by Winton during that fateful time and who grew up to become a Canadian journalist.

You’ll need a box of tissues when you watch this film, but in my opinion, it’s a must-see. Not only is it an important historical account of the Holocaust, but it is an inspirational story that will make you want to get up and do something, anything, to change the world for the better. I wouldn’t recommend it for very young children, however, as there are stories about the gas chambers, etc.

“Nicky’s Family” has been playing theatrically in Boston and some areas of Florida. It will open in Los Angeles and New York on July 19, 2013. If you are in these cities, do yourself a favor and see it. If not, keep an eye out for it on DVD and VOD.

Meanwhile, read my companion interview with Eva Paddock, one of Nicky’s family who was brought to England at the tender age of 3-1/2.