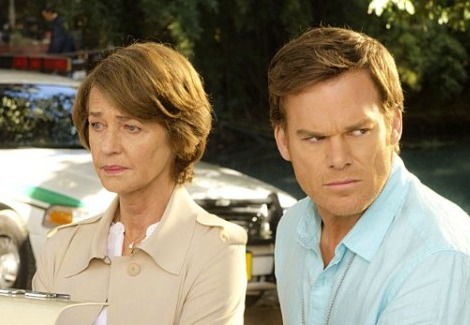 This third episode leading up to some final resolution for “Dexter” begins with Harrison calling out to his father, who finds his little son on the floor with red stains everywhere. Turns out the boy ate an entire box of cherry popsicles. How’s that for a tease?

Deb gets arrested for drunk driving, and who does she call to bail her out? Quinn, of c0urse. When Quinn asks her if he should be worried about her, she gets defensive and storms off. (Denial ain’t just a river in Egypt, Deb!) Jamie eventually finds out that Quinn left her in the night to help Deb and also storms off. Poor Quinn, who can’t seem to keep women from storming off.

Meanwhile, Miami Metro finally finds Sussman’s cabin. Sussman’s body is no longer hanging but is now on the floor with a gunshot wound. The police assume he killed himself with the gun, and they close the Brain Surgeon case. Dexter knows, of course, that Sussman isn’t the Brain Surgeon, nor did he kill himself with a gun. “Whoever is after Vogel wants the cops off the case,” he says to himself.

Vogel receives a text from an unknown caller saying, “Look outside.” She reluctantly (and stupidly, if you ask me) opens the door to find two boxes labeled “His” and “Hers” that contain pieces of brain tissue. She calls Dexter, and they examine the contents of the boxes. He then tells her that he has been through her files and has concluded that the most likely subject for the Brain Surgeon is her former patient, Ron Galuzzo.

Dexter admits to Vogel that Deb knows everything about him. “You do really feel badly, don’t you?” she asks him. “You analyzing me now?” he responds. “It’s just so unusual,” she tells him.

Vogel asks Dex why he didn’t kill Deb. He says he didn’t because he loves her. But Vogel tells him that psychopaths don’t love in the same way as typical people and that they aren’t capable of selfless love. When she asks him what he loves about Deb, he doesn’t know. Dex says he’s the only one who understands Deb and that he has to help her, but Vogel asks him how he expects to be the solution when he was the cause of Deb’s problems. Deb and her boss are hired by a woman to follow her husband and find out if he’s having an affair. They end up taking photos of her husband having sex with an unknown woman in his car. When they show the photos to the wife, she denies that it’s her husband and leaves.

Dexter confronts Deb about her DUI and convinces her to have dinner with him. Then, he goes to a mall and talks to Galuzzo, who is there selling exercise equipment. When Dex pulls out Vogel’s book, pretending that he’s casually reading it, Galuzzo claims he has never heard of the author. Of course, Dex knows Galuzzo is lying since he used to be Vogel’s patient.

Dex breaks into Galuzzo’s home (as only Dexter can do), and looks around. He sees a pot of stew on the stove and finds a finger inside. He recoils. A look in the refrigerator reveals a series of containers with body part names on them. It appears that Galuzzo is a Hannibal Lecter-style serial killer, but the brain in the frig (marinating in garlic sauce) is intact. So, Dex realizes that Galuzzo is not the Brain Surgeon.

When Dex and Deb meet for dinner, he points out a man at a nearby table and shows her a video on his phone of her saving the man’s life during a case. He tells her that she isn’t a bad person but a good person. Tears fill her eyes.

Deb sits in her car, drinking as she plays and replays the video of when she saved the man’s life. Then, she stomps into Miami Metro and whispers in Quinn’s ear that she killed LaGuerta. He grabs her and takes her into an interrogation room. He tells her that Estrada’s gun killed LaGuerta and believes she is just drunk and distraught. He calls Dexter for help.

When Dex receives the call, he asks Vogel to come with him to help Deb. On the way, Vogel tells him that he doesn’t love Deb in the same way she loves him. “I can’t just give up on her!” he says. “I can’t!”

Deb is far from happy to see Dex at the police station, but he surreptitiously drugs her in the neck as he does his victims, pretends that she has passed out, and carries her out. Dex realizes that he has been making things worse for Deb and that he probably can’t fix the situation. He asks Vogel if she really thinks she can help Deb. He leaves Vogel and Deb together, but not before handcuffing Deb to the furniture, telling Vogel that Deb is likely to become violent when she comes to.

When Dex is alone again, he thinks, “Vogel was right. I am perfect … but only at one thing.” Then, we see him with Galuzzo on the slab covered in plastic. Before he stabs Galuzzo with the knife, he says, “I’m just like you. I consume everyone I love.”