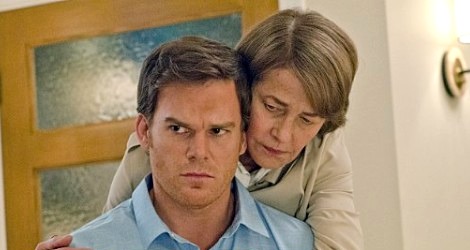 This second episode of the much anticipated final season of “Dexter” was directed by star Michael C. Hall. In the first episode of this season, we learned that Dr. Vogel knows all about Dexter and what he’s been up to. In episode two, we learn that she was friends with Dex’s father, who told her everything. In fact, she was partially responsible for coming up with “the Code.”

She even has videos of Harry talking about Dex as a child, and she believes psychopaths are a necessary part of society. She tells Dex that he’s exactly how he is meant to be.

This sucks Dex in, of course, and Vogel uses that information to coerce him into helping her. It turns out that the killer who cut off the back of the victim’s head in the last episode just may be after Vogel. He left a piece of that victim’s brain at her house, and Vogel hopes that Dex will get rid of the killer, who has been dubbed “the Brain Surgeon.”

Meanwhile, we’re shown an unknown murderer putting a plastic bag around a victim’s head, while saying, “You don’t deserve this, but I have no choice.” That victim then ends up elsewhere with the back of his head removed just like the other victim.

While investigating the scene of the murder, Dexter finds a fingerprint on the plastic bag that was used to smother the victim and later matches the print in the computer to a man named Sussman. He goes to Sussman’s house and looks around, not telling anyone, of course, about the print. He has to stay ahead of Miami Metro if he’s going to off the serial killer before they close in on the guy.

Deb meets with her boss and once more covers for Dex, as she claims that she just happened to find Briggs’ dead body. She finds a key to a storage facility among Briggs’ things, but when she looks for the stolen jewels there, she’s confronted by El Sapo, who beats her up, takes the jewels, and steals her gun.

Dex and crew are called to investigate a crime scene and discover that El Sapo has been executed in his car. Dex notices that there is some blood on the broken glass of the windshield, and since El Sapo was shot from the side of the car while inside, Dex assumes that blood belongs to the perp. He stashes the piece of bloodstained glass into his pocket and goes to Deb’s to warn her that El Sapo is dead. Deb still loves Dex but also hates him, so she begs him to stop caring about her and leave.

When Dex matches the blood from the windshield of El Sapo’s car, he finds out that the blood belongs to Deb. He then confronts Deb, telling her he knows she killed El Sapo. She claims that she was so upset that she barely remembers it. They found a gun in El Sapo’s glove compartment that is probably the one he took from Deb in the storage facility, so Dex agrees to switch guns in the evidence room to prevent Deb from being connected to El Sapo’s murder.

There’s some drama between Quinn, Batista, and Jamie. Batista discovers that Quinn is dating his sister and confronts Quinn about it. Batista doesn’t mind that they’re dating, but he pressures Quinn to take a test that would advance his career and help him become a better mate for sis. Quinn resents this, and when he discusses it with Jamie, they argue. Jamie’s more upset, however, because Quinn can’t seem to stop talking about Deb.

Through what Dex found at Sussman’s apartment, he locates Sussman’s hunting lodge and goes there to try to find the man he believes to be the latest serial killer. Instead, he finds Sussman hung and dead, and he realizes that Sussman is probably not the serial killer after all.

Vogel calls Dex, telling him she believes someone is in her house. Dex tells her to wait in her car, and he drives to her house, where he searches but finds no one. When Vogel enters the house, she discovers a DVD that doesn’t belong to her. They play it and find footage of the victim from the top of the episode as Sussman puts the plastic bag around the man’s head. We then see the third person in the room who held a gun on Sussman, forcing him to smother the victim. The identity of the Brain Surgeon remains a mystery.

Dex tells Vogel that she’s wrong about him. He says he’s a mistake because he has destroyed his sister’s life, but Vogel tells him he’s perfect. When she puts her arms around him, he melts and gasps. “I can’t help but think of myself as your spiritual mother.” – Dr. Vogel to Dexter

“People like you don’t usually seek an emotional connection.” – Dr. Vogel to Dexter

“Debra doesn’t want my help, but Vogel is demanding it.” – Dexter to himself

“I didn’t want to hate you. I wanted the opposite. But it didn’t work out that way. I can’t change the way I feel, so will you go, please?” – Debra to Dexter

“I believe that psychopaths are not a mistake of nature; they’re a gift.” – Dr. Vogel to Dexter

“Without psychopaths, mankind would not exist today.” – Dr. Vogel to Dexter

“It’s what I do, the one thing I’ve always been good at – vetting, stalking, and killing people. I can’t even do that anymore.” – Dexter to Dr. Vogel

“You’re exactly what you need to be, Dexter. You’re perfect.” – Dr. Vogel to Dexter