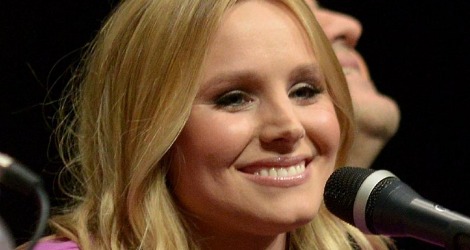 Well, Marshmallows. Below is your first look at the “Veronica Mars Movie.” So far, I love it and think it’s going to fulfill all my dreams. Ok, maybe not all my dreams, unless Veronica comes to my home with a million dollars. But it’s fulfilled at least one of my dreams, which is to see a movie made. I even backed the project on Kickstarter. I’m an investor.

So what do we know from the footage below and the Comic-Con panel?

The film takes place years after the series wrapped (by which point, Veronica was just finishing her first year of college), and Veronica will be coming back to Neptune for her high school reunion.

Logan calls Veronica. He needs her help. She says “I don’t really do that anymore.”

Veronica goes to a job interview. We learn that she has a degree in psychology.

Weevil has a wife!

Veronica has not worked as a private eye since the last time we saw her in season 3.

Jamie Lee Curtis is in the movie.

Part of the movie is Veronica getting pulled back into this life that she thought she left behind.

Rob Thomas said at the Comic-Con panel, “I think the story that I wanted to tell is the one that I think fans want to see. I wanted to get the old gang back together.”

Francis Capra (Weevil) says he felt like he fell off the face of the planet after the show. He thought people didn’t know who he was anymore, and the fans brought him back from the dead. “You guys brought my family back,” he tells the fans.

Enrico Colantoni (Keith Mars) says it was easy slipping back into the father-daughter chemistry with Kristen. He says he has a paternal thing with her and now that she’s a mom, they have more to talk about.

Kristen Bell says it wasn’t hard at all for her to jump into the role again. Rob Thomas’ dialogue flows naturally for her.

Rob Thomas says they made an incredibly ambitious, sprawling, low-budget movie rather than going with minimal sets and locations. They wanted to include the characters we grew fond of.

Rob Thomas says the movie will come out in early 2014. He just signed a book deal for a couple of new Veronica Mars books, the first of which will come out pretty close after the movie.

He wants Veronica Mars to be a Bond franchise. He hopes they make a ton of money on the movie and they can go forward through the normal channels. He doesn’t think Kickstarter is meant to fund huge hits. Next time maybe the studio will just give them the money.

Check out the Comic-Con footage and first look, and leave comments below!