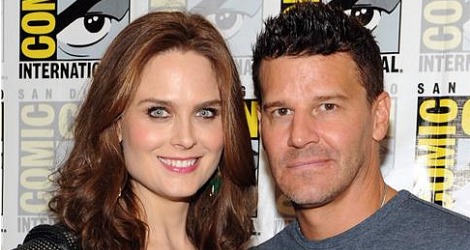 With last season of “Bones” ending in such heartbreak for both Brennan and the fans, it was a delight to hear the show’s creator, Hart Hanson, tell the Comic-Con audience that Booth and Brennan will get married this season!

“We’re not toying with you,” he said. “They will get married this season.” You’d better not be toying with us! I have a feeling this won’t be a traditional wedding, though. What do you think?

To make things more exciting, Boreanaz called Deschanel out onto the stage to “do it right” (the proposal). He got down onto one knee and “in character” popped the question to her.

This brought cheers to the audience, and Deschanel replied, “I’m getting married to David Boreanaz!” That brought laughs to everyone!

Hart Hanson added, “I think it will be better scripted [for the show].” Who cares, as long as it happens! “The Secret in the Proposal” is the title of the Season 9 opener. “Everybody’s mad at Booth, so he seeks out someone he can talk to,” say Hanson. That someone happens to be an ex-priest from Booth’s past. Booth needs help mending his relationship with Brennan, as well as figuring out how to finally get rid of the dastardly villain, Christopher Pelant. Let’s hope that happens fast!

There will also be a lot of work ahead for Booth and Brennan to get back to where they were.  Brennan is not happy, and Booth knows it. Interestingly, they go undercover (which we love) for the second episode, and it happens to be at a couple’s retreat – do you think Hart planned this on purpose? I think so, and I think it will be a fun episode. Will they be forced to discuss their relationship?

It was also brought up, that Sweets and Daisy may be getting married this season too. I like Daisy: she is quirky, funny and loves Lance. That’s what we want for him, right?

Whatever happens this season, it will surely be entertaining – and of course, we have all been waiting very patiently for Booth and Brennan to marry!

Will you be watching? Are you excited for the wedding? Please leave comments below!