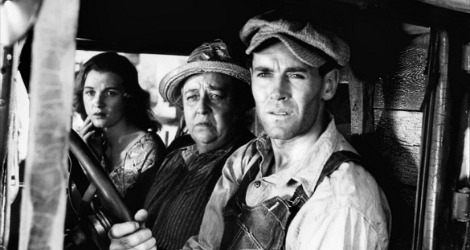 [Editor’s Note: We’re excited to debut a new column from Belle Wong, who will be covering book adaptations in our “Based on the Book” section. You can read all of Belle’s Reel Life With Jane stories here, and be sure to click through to her site, MsBookish.com to learn more about Belle and see what she’s reading … Jane]

A new version of John Steinbeck’s Pulitzer-prize winning “Grapes of Wrath” may be coming to the big screen in the near future! Deadline reports that Stephen Spielberg and DreamWorks are in discussions with Steinbeck’s estate to acquire the rights to make another “The Grapes of Wrath” movie.

Directed by John Ford, who won an Oscar for his efforts, the film also snagged an Academy Award for Jane Darwell as Best Supporting Actress. The film garnered five other Oscar nominations, including a Best Actor in a Leading Role nomination for Henry Fonda.

Set during the Depression era, the novel is about the Joads, an Oklahoma farming family who are driven off their farm due to drought and economic circumstances; the book chronicles their desperate journey to California in search of a better life. It’s not an upbeat read, but gives an unstinting look at what life was like for many of the poor migrating from the Dust Bowl during the Great Depression.