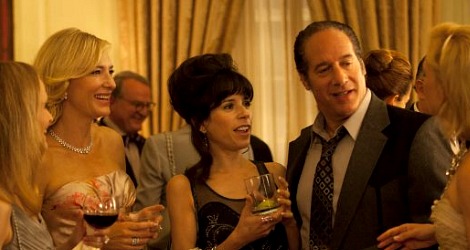 Woody Allen’s great gift as a writer-director are the beautiful, complex, funny and strong women he’s created in some 48 movies, including “Annie Hall,” “Vicky Cristina Barcelona,” “Hannah and Her Sisters,” and “Match Point.”

Cate Blanchett, who stars in Woody Allen’s new comedy-drama “Blue Jasmine,” joins this long list of memorable and fascinating women as a brittle but resilient once-wealthy East Side socialite trying to recover from a nervous breakdown after her unfaithful husband (Alec Baldwin) lands in jail after being exposed as a Madoff-like con man.

While the women are the focus of Woody Allen’s films, they’re surrounded by a memorable constellation of men. The actors who play supporting but strong roles in “Blue Jasmine” are an eclectic group.

The biggest surprise is stand-up comic Andrew Dice Clay, who in a role nothing like his comic persona, plays Augie, the former husband of Jasmine’s sister, Ginger (a terrific Sally Hawkins). In a part that could be a caricature of a coarse blue-collar guy, Clay brings depth and empathy to his role as a man whose dreams are shattered after Jasmine’s husband swindles him out of $200,000.

Ginger, a grocery store clerk, like her sister is dependent on men. Ginger is surrounded by a trio of men Jasmine considers all to be losers. There’s Augie of course, who may still be carrying a torch for his ex-wife. But the worst of the bunch according to Jasmine is Ginger’s current lover Chili (Bobby Cannavale), a car mechanic, who is hot headed and volatile but good-hearted and genuinely loves Ginger. Then Ginger meets Al (Louis C.K.), a man who fixes audio systems, who pays her extra attention and may offer her a better life and who, Jasmine points out, has got to be a step up from  Chili.

Meanwhile, life has thrown Jasmine a lifeline in the form of Dwight, played by the versatile Peter Sarsgaard (also currently in a much different role as a sleazy pornographer in “Lovelace” and a death row inmate on “The Killing“), a promising diplomat who takes a romantic interest in Jasmine and offers her a return to a life of money and status.

Peter Sarsgaard, Andrew Dice Clay and Louis C.K. – with Cate Blanchett very much the center of attention – were at a press conference recently in midtown Manhattan to talk about the film and their roles.

Sarsgaard said he heard Woody Allen was interested in him for a part and then the director called him. After a 45-second conversation, Allen offered him the role. “I didn’t even know what it was.” The only part of the script he was given to read had to do with part. The next time he saw the director was on the San Francisco set.

His initial impression of his role as Dwight was that here was “this woman who seemed to have so much going on, seeing someone who looked like she was on the edge but at the same time, I’m playing somebody who’s interested in her for some reasons that are not totally deep,” he said.

“I had to play someone who was not interested in reality because the reality was that this woman looked like she needed medical help some of the time, but if my need is to have a partner, a person standing next to me on a red carpet or a kind of first lady, she seemed perfect for that, is strong enough, then it all gets kind of justified. I ended up playing this character in a reverse order.”

Sarsgaard’s take on how the director makes his casting choices: “I think Woody picks up on something that’s in you that you can’t change when he casts you, and he knows that’s just going to automatically be there. I have no idea what it was with me. I just felt lucky to be a part of it.”

Clay, 55, looked like an aging rocker in his dark sunglasses, dyed black hair and leather vest. He wore a t-shirt that said “Rollin’ With Dice.” “He has some great moments at the beginning of the movie and at the end where he brings about Jasmine’s comeuppance. Allen originally envisioned Louis C.K. for the role.

While he was in Allen’s office, he noticed the walls full of photographs, including Muhammad Ali and “all these people through the ages.” Outside on a table was Allen’s hat, upside down as though he’d just left it there. Louis C.K. said he was thinking, “Even if they tell me he’s too busy and I never meet him, it was worth it. And then I went into this room and there he was. I remember thinking he looks just like Woody Allen.”

After reading a scene, Louis C.K. thought, “I can’t really do this guy, so I’ll just read as myself and not get the part, so I left and I think I cried. I was so emotional about it. I just met Woody. He was nice to me. I didn’t get the part. I’ll never see him again.”

Soon after that, Woody got in touch with Clay’s manager. “When I got that call after Louis had failed,” Clay said, which made the journalists crack up, “I actually thought my manager was kidding me ’cause I was here doing a gig at Westbury when my manager said Woody wants to meet you tomorrow and I was like, you’re kidding right? For what? You know, ’cause I could never think he could see past the persona I play on stage as a comic.”

As for how Allen directed him, Clay said, “I think the direction comes in his casting. He gets as close to the part on the page with the person, and then he lets you really work with it. I mean he was very workable on the set and very open to the ideas because some of the words I would change to fit the way I speak, and he was just great with it.”

Louis C.K. said that when he heard the role when to Clay, he thought it was perfect. “I was so happy for Dice. He’s a good guy and that was the end of it for me.”

But soon after that, someone from Allen’s office contacted Louis C.K. again to say someone would be coming over with a package. It was a script, and a young woman told him he had 40 minutes to read it. Woody wrote him, “You couldn’t do that guy but here’s another guy that you could do.” Louis C.K. said, “There were three scenes in it and they just made me laugh. This guy’s a total jerk off, but I can totally play him and so Woody wrote, ‘Please do the part,’ and I said yes.”

Louis C.K. described his character and his relationship with Ginger: “He’s a blue-collar guy who works in a stereo store. He meets a terrific girl. He’s married and he just wants to eke out this little place where he gets to go to hotels and have romantic sex with Sally Hawkins, which I would (also) like to do.” The journalists cracked up.

He described working with Hawkins: “Sally’s got this infectious smile and she’s a very silly person … and then also she’s extremely dedicated and breaks herself into pieces to get the thing right … and she was easy to be around.”

Louis C.K. wasn’t interested in a movie career when Woody called. “I never go out for movies and stuff anymore. I have my life in a pretty good rhythm of doing stand up and then doing my TV show and then I spend time with my kids,” he said. “I get offered stuff sometimes and I usually don’t want to do it. You gotta go live in like Shreveport, Louisiana for half a year, and I just don’t think that’s worth anything.”

Dice also wasn’t interested in making movies at this point, but you don’t say no to a chance to be in a Woody Allen movie. He acted early in his career and lived in Los Angeles, which was useful for his role in “Blue Jasmine” because it brought back memories of the people he met there and animosities he had towards people like Jasmine, who are rich and privileged.

“Because I hate the rich,” Clay said. “I hate ’em on film and I hate ’em in reality ’cause I lived for a long time in Beverly Hills, and I’m from Brooklyn and when you talk to people with old money, it’s like you’re an insect to them, so the way she played her character was so perfect. … I had a neighbor just like her in Beverly Hills and I had such hatred for this woman that when I had to do some dialogue to Cate, that’s all that I could think about. But that’s how those people are, what they would call new money, they have no respect for those people that come from blue collar, that work their ass off.”

“I’m broke Louie,” Clay replied. “I was actually going to ask you for a loan tonight. But you know what I’m talking about. I mean, Louie also comes from that kind of family where you break your ass and try to accomplish in life and when you come from certain families that maybe just things are handed down to you, like Coca Cola, you don’t have to work too hard and you look at anybody who didn’t come from that kind of class like garbage, so that’s how I got into my head.”

Louis C.K. got in the final crack, “I like Dice’s example of class as the Coca Cola family.”