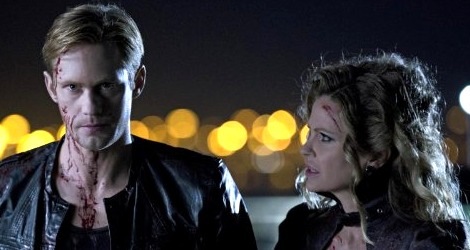 It’s been a while since I’ve watched “True Blood,” so rather than try and race through the past couple seasons, I decided to just jump back into it. I think I’ve got the gist of what’s happening on the sexy supernatural show:

So let’s get right to it. Do you think Bill is ok? Or is he the Red Lilith of Death? I was thinking he might be ok — especially after he treated Jessica so sweetly and put her to bed (I was half expecting him to read her a bedtime story), but then the Red Lilith of Death came back and absorbed into his body, so all bets are off. Cool about his ability to keep blood from spilling, though. Hmm … maybe there’s some sort of hidden message there.

Seeing Alcide naked is still a major draw for me. And apparently, those wolves are, well, animalistic when it comes to sex – and threesomes. The scene where they were gnawing on that poor human was a little gruesome, though.

Someone tell me where Andy’s babies came from. I didn’t pick that up in the storyline. Although I get that they’re not exactly human, since Arlene called them aliens. Plus they appear to have aged six or seven years overnight.

I’m also a little confused about where Sam fits into things now, but no matter, because seeing him in any form is cool. As is Lafayette: “That’s the sickest thing I’ve seen on TV, and I watch ‘Dance Moms.'” Oh, how I’ve missed Lafayette.

I had a feeling the guy who picked up Jason was going to be a major part of the storyline. And Rutger Hauer! I’m not sure how Warlow fits in to things, but I’ll take Rutger Hauer any day of the week and twice on Sunday.

Sookie rescinding her invitation to Eric? That can’t be good, can it? Even though I haven’t really seen these two together, I don’t like the idea of them being estranged.

By the way, this episode was directed by Stephen Moyer.

I’ll leave you with this quote from Jason when Bill OD’d on Lilith’s blood: “Unless he’s flying over us like a naked, evil Superman.”

Your thoughts on the season six premiere of “True Blood”? Feel free to fill in the blanks for me.