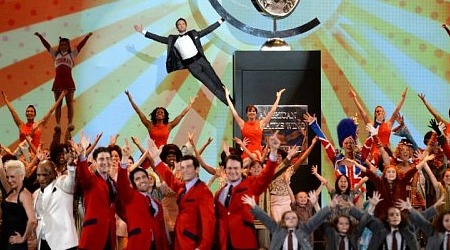 Little girls were everywhere to be seen on the 2013 Tony Awards, from the cast of “Matilda” to the cast of “Annie” to the cast of “A Christmas Story.” Well, okay, there were some little boys, too, but that only made Jane Lynch’s rendition of “Little Girls” from “Annie” even more apropos when she sang, “Everything around me is little.” Host Neil Patrick Harris quipped that Broadway is beginning to look like Chuck E. Cheese.

It was Harris’ opening number, however, that stopped the show more than any other. It was so intricate that I honestly don’t know how they pulled it off. Well-written by Lin-Manuel Miranda and Tom Kitt and brilliantly staged, it made reference to the kerfuffle between Alec Baldwin and critic Ben Brantley, as well as the extreme closeups in the musical film, “Les Miserables.” The number brought the house down and everyone up on their feet for a standing ovation.

I found the awards show particularly enjoyable this year, but perhaps that’s because I was happy with most of the winners for a change. It could also be because it has been a great season on Broadway, and once again, the writers of the Tonys outshined the Oscars by eons.

Harris suggested “playsicals” to bridge the gap between people who prefer plays to musicals and vice versa. The suggested mashups included “The Elephant Man of La Mancha,” “42nd Streetcar Named Desire,” “Children of a Lesser Godspell,” “Cats on a Hot Tin Roof,” and “A Midsummer Night’s Dreamgirls.”

There was also a clever mid-show number with Harris, Andrew Rannells, Megan Hilty, and Laura Benanti that poked fun at Broadway actors who have made the transition to television series (not always successfully).

“Phantom of the Opera” was recognized for celebrating its 25th year. Unfortunately, Andrew Lloyd Webber was unable to attend due to a health problem that has caused him to require back surgery.

Several awards were presented before the televised show. The most notable of these included the Best Choreography win for the great Jerry Mitchell for “Kinky Boots” (the musical version of the film by the same name). He also directed the show but did not win for direction. That award went to Diane Paulus for her inspirational work on “Pippin.” In previous years, Paulus helmed the celebrated revivals of “Hair” and “Porgy and Bess,” and Mitchell choreographed “Hairspray” and directed and choreographed “Legally Blonde,” among others.

I was happy to see Andrea Martin win the Best Featured Actress in a Musical award for her performance in “Pippin.” I got a chance to sing with a group of fans on the cast album, backing up Andrea on her song, “No Time At All.”

What’s so great about Martin in “Pippin”? Besides her energy and spirit, she performs some aerial tricks in a skimpy costume that shows off an incredible figure for a woman of any age, let alone someone of 66. When she sings about never passing up the last piece of cake, don’t believe it!

“Pippin” also won for Best Revival of a Musical. I was disappointed, though, that the producers didn’t give enough due to Stephen Schwartz (“Godspell,” “Wicked”), who conceived of the show and wrote the music and lyrics while still a very young man in his 20’s. If it weren’t for his vision, this show would never have existed. Take a look at the “Pippin” number on the Tonys.

Miller was one of four African American actors who took home Tony Awards for their performances – something that would be unheard of at the Oscars or the Emmys, for that matter. It’s rare at the Tonys as well, so bravo. Cicely Tyson won the Best Leading Actress in a Play award for “A Trip to Bountiful,” Courtney B. Vance won the Best Featured Actor in a Play award for “Lucky Guy,” and Billy Porter took Best Leading Actor in a Musical for “Kinky Boots.” Tyson, at age 88, is the oldest person to ever win a Tony and hadn’t been on Broadway for 30 years.

Interestingly, Porter of “Kinky Boots” and Bertie Carvel of “Matilda” were the main contenders for Best Leading Actor in a Musical, and both performed in drag. I saw “Matilda” first and didn’t think anyone could do better than Carvel, but Porter’s performance in “Kinky Boots” is a tour de force that I think is more demanding. So, his Tony was well-deserved.

Carvel won the Olivier award in England for his performance, and “Matilda the Musical” took the West End of London by storm before landing on Broadway. I absolutely loved the show, but many people have complained that they can’t understand the lyrics. Still, the show’s spirit is wonderful, and on Tony night, the four girls who rotate as Matilda were on stage simultaneously.

The great Gabriel Ebert of “Matilda” took the Tony for Best Featured Actor in a Musical. Sadly, he wasn’t featured in the performance by the cast. He is absolutely hilarious as Matilda’s father, so I’m sorry you won’t get to sample some of his work in the performance below.

“Motown the Musical” didn’t clean up at the Tony Awards, and this is probably largely because the book of the show is very weak. But you can’t fault the performers, who are stellar across the board. When I saw the Jackson Five portrayed on stage, I felt like I had entered a time warp.

“Cinderella” didn’t fare as well either, but an icon of Broadway, William Ivey Long, won for his costumes. Check out the amazing quick change that I’m still trying to figure out.

Sadly, Kenneth Posner lost even though he was nominated three times in the same category for Best Lighting Design (for “Kinky Boots,” “Pippin,” and “Cinderella.”) The only other nominee, Hugh Vanstone, won for “Matilda.” I guess Posner cancelled himself out.

Judith Light won Best Leading Actress in a Play for “The Assembled Parties” – her second Tony two years in a row. Last year, she won for her performance in “Other Desert Cities.” Tom Hanks was part of the Tonys for the first time as a presenter and a nominee for his role in the late Nora Ephron’s play, “Lucky Guy.” He lost to Tracy Letts, though, of “Who’s Afraid of Virginia Woolf?”

I have been a fan of Christopher Durang’s for many years, so I was happy to see him win Best Play for “Vanya and Sonya and Masha and Spike, ” a very funny piece of writing that I saw about a week ago. None of its stars, which include David Hyde Pierce and Sigourney Weaver, won for their performances, however.

“Kinky Boots” led the night with six wins, and “Pippin” and “Matilda” were the runners-up with four wins each. Cyndi Lauper won for the music and lyrics of “Kinky Boots” even though it was her first foray into musical theater.

“Kinky Boots” also won the top prize of the night – Best Musical. The night I saw the show, director and choreographer Jerry Mitchell was there, and I had a chance to say, “Bravo, sir!” to him. There is no way you can walk out of that theater without a smile on your face.

In the number the cast performed on the Tonys, they dance on conveyor belts. Mitchell conceived of this number, and it took them six months to figure out how to do it. They essentially had to create the technology and make it so that the actors could control the starting, stopping, and speed of the conveyors. That was the only way to make it safe for them. The result is a musical number like no other.

I’m also trying to figure out how they pulled off the ending number on the Tony Awards show, even though it didn’t require complex technology. It “simply” included lyrics that referred to what had just happened during the broadcast. I guess Lin-Manuel Miranda and Thomas Kail are fast writers behind the scenes, and Neil Patrick Harris is a speed reader of teleprompters!

Watch below as he closes – with the help of Audra McDonald (who purposely drops her microphone on the stage at the end) – what was one of the best award shows in memory.