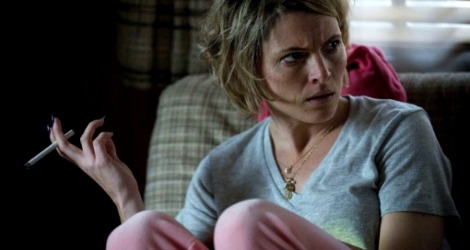 “Your daughter’s a prostitute. Are you aware of that?” – Linden

Yeah, she gets the Mom of the Year award, doesn’t she? That woman has no soul. She barely even registered guilt when Linden dragged it out of her that Kallie had come to her house the night she disappeared, but her mom locked the door because her boyfriend was coming over. So Kallie went away. And who knows where she is now.

Also, Amy Seimetz (pictured above) gets my Actor of the Episode award, for making such a horrid character believable.

I’ve been avoiding “Grief TV” lately, but am making an exception for “The Killing,” because it’s so well done. But it makes me sad to think of all horrible things homeless kids are forced to do for money. And even sadder to think of their parents not giving a rat’s ass, which is why a lot of them are there in the first place.

Speaking of bad parents, it’s no wonder Seward ended up as a bad, bad guy. His dad took a baseball bat to him when he was 16, and said something to the effect of making a man out of him. “And how’s that workin’ for ya,” said the guy in the cell next to him.

The scenes with Seward were sort of disconnected in this episode. Like there really wasn’t a clear connection to what’s happening on the streets with the kids. However, when the cops beat up his cell buddy to get him to take his meds? Maybe there’s actually a heart in there somewhere. More of a heart than Kallie’s mom, that seems clear.

And Lord help us if the Seattle Police Department — including Twitch’s twisted parole officer — is indicative of cop shops around the country. Who’s the real monster – the people behind the bars or the people who put them there?

And speaking of twisted … a stuffed bear with handcuffs? That’s messed up.

“Now you look like a rabbit. Some big, hairless, albino bugs bunny.” – Bullet to Holder as he eats carrots

What is up with Frank Becker’s wife? Was she putting the moves on Frank’s co-worker – in front of Frank, Jr.?

Love how Linden was telling Holder about Tiffany, while completely ignoring Carl, who’s being a major pain in the ass. “Carl, why are you still here?” she says. “Don’t you wonder why you never made sergeant? I’ll tell you why. Because 23 years of experience, and all you are is in the way.” Yeah.

Your thoughts on this episode of “The Killing”? Tell us below.