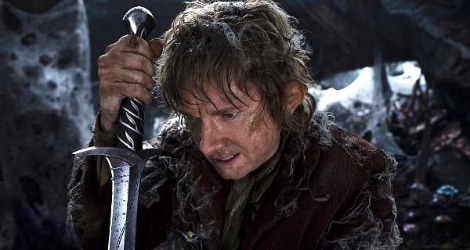 The first teaser trailer for “The Hobbit: The Desolation of Smaug” hit the web, and it looks like a return to the fast-paced “Lord of the Rings” films, rather than last year’s somewhat meandering “The Hobbit: An Unexpected Journey.”

I still loved “Journey,” but felt it wasn’t as well-paced as the “Lord of the Rings” films. Maybe part of the reason I’m sensing a return to those films is because we see some familiar faces in the trailer below.

The trailer shows Bilbo Baggins (Martin Freeman), Gandalf (Ian McKellen) and their company of dwarves traveling over waterfalls and through dark forests to battle the dragon Smaug. We also see the return of Orlando Bloom as the elf Legolas, though purists might not be thrilled about Evangeline Lilly’s Tauriel, a new character invented for the films.

The story follows Thorin Oakenshield (Richard Armitage) and company, who after successfully crossing over (and under) the Misty Mountains must seek aid from a powerful stranger before taking on the dangers of Mirkwood Forest – without their Wizard.

If they reach the human settlement of Lake-town, it will be time for the hobbit Bilbo Baggins to fulfill his contract with the dwarves. The party must complete the journey to Lonely Mountain, and burglar Baggins must seek out the Secret Door that will give them access to the hoard of the dragon Smaug.

And, where has Gandalf got off to? What is his secret business in the south?

“The Hobbit: The Desolation of Smaug” hits theaters Dec. 13, 2013. Leave thoughts below.