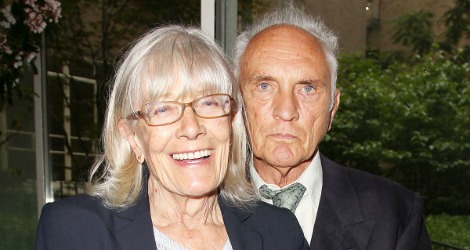 Terence Stamp, who I have loved since he played the naive, innocent seaman in “Billy Budd” (1962), and then the creepy kidnapper in “The Collector” (1965), has  his juiciest part in years in “Unfinished Song,” directed by Paul Andrew Williams.

Stamp stars as a grouchy, difficult, old-aged pensioned full of rage as he’s forced to deal with the impending death of his terminally-ill beloved wife, Marion, played by a relentlessly upbeat Vanessa Redgrave.

While his wife joins the choir group at local community center of old-age pensioners, where a fresh-faced music teacher (Gemma Arterton, who also stars in Neil Jordan’s “Byzantium” as a sexy vampire ) leads these oldsters in songs that range from hip hop to rock and rap, Arthur grouses and fusses over his wife. He rages at  his helplessness in the face of her illness, and he’s furious at the time and energy she devotes to her singing group. Marion, much as she loves her husband, is determined to enjoy the time she has left.

One of the highlights of the film is a chance to see Redgrave, in a knit cap to cover the ravages of chemo, sing a rousing rendition of Salt-n-Pepa’s “Let’s Talk About Sex, Baby.” She also performs a particularly moving version of Cyndi Lauper’s “True Colors,” off key but full of heart and passion, that will leave you verklempt.

Later, after you see Stamp, who has a remarkably strong voice, find hope in music and reconnect with his estranged son (Christopher Eccleston) and his granddaughter, the only family he has left, you will be emotionally wrung out.

“Unfinished Song” is the perfect antidote to all the summer superhero action films in theaters right now. And talking about superheroes, Stamp was out of work for eight years when he scored  the role of the villain General Zod in Richard Donner’s “Superman” in 1978, and reprised the role in 1980’s “Superman II.” He’s been working steadily since, but rarely in a role as nuanced and emotional as this.

Stamp was in Manhattan Monday to attend a luncheon at Michael’s in honor of “Unfinished Song.” The good folks at Weinstein sent me pictures from the event of Stamp with his co-star, Vanessa Redgrave, along with Oscar-winner Cuba Gooding Jr. (My invitation to must have gotten lost among the thousands of other invitations I get every day.)

The charming “Unfinished Song,” which will wrap you in its warm blanket of sentimentality and never-too-late message of hope, opens in theaters Friday, June 21, 2013.