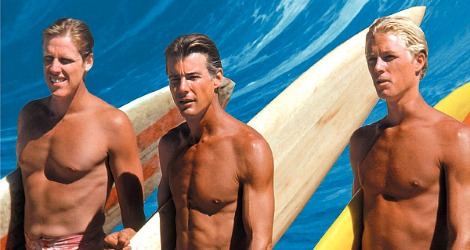 “Big Wednesday” (written and directed by John Milius, 1978) follows a decade or so in the lives of three California surfers who survive, more or less, the great cultural changes of the late sixties and early seventies. After seeing this cult film, you might wonder if Moondoggie and Gidget had stayed with the wild, free beach life, they would have ended up like these sadder but wiser characters.

Read Surfin’ Films: The Good, the Bad and the Wipeouts (Part 1: ‘Gidget’)

Unlike “Gidget,” “Big Wednesday” is replete with great surfing scenes, and unlike the leads in “Gidget,” these actors actually get to shoot some curls of their own. The pro riding scenes, as in the dramatic final shots along the notorious Banzai Pipeline on Oahu’s North Shore, are heart-thumping spectacular.

Milius was a surfer himself and has an insider’s take on nostalgia for the lost freedom of the earlier era.

Some consider “Big Wednesday” the anti-“Gidget,” but despite its more adult content, it has many of the same themes of the earlier film. It extols the exhilaration of catching that one righteous wave and illustrates the rebellious nature of  the lifestyle. But whereas “Gidget’s” main characters comfortably reemerge into the mainstream, “Big Wednesday‘s” surfers find the transition less smooth.

Try to stick with it through its early over-the-top surfer gang antics, because the latter half of the film makes it all worthwhile when Leroy (Gary Busey) is seen as an unredeemed draft-dodging, hippie beach bum and possibly a drug dealer; Jack (William Katt), the trio’s reasoner, is a Vietnam War vet troubled over rejection by the one girl back home;  and Matt (Jan-Michael Vincent), with a sympathetic wife and a child, continues to fight his alcoholism and struggle with his fading image as a champion.

On Jack’s return, they gather to find the gravesite of their old friend “Waxer,” who died in Vietnam, then part again, only to meet once more to catch a near-mythical swell that may revive the spirit of their youth. In the end, an up-and-coming young surfer out-rides them all.

In the final shot, when Matt walks away through the crumbling beach gate, back to his wife and child, you feel that although he has handed over his board to a younger surfer, he may not have left the waves forever or the bittersweet memories of his earlier life.

This ending has been criticized as too obviously symbolic and sentimental, but to me it’s a moving  summing-up of the struggle to stay free and survive and is one reason why “Big Wednesday,” which was not a commercial success on release, has acquired a cult following.

If these reviews of “Gidget” and “Big Wednesday” have piqued your interest, you might want to try others that usually appear in the “best” lists for films on this subject, including these:

Do you have a favorite surfing movie? Tell us in the comments below.