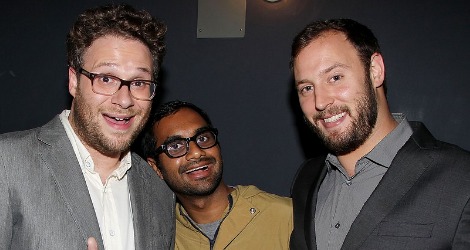 There are lots of hilarious moments in “This Is The End,” co-written, directed and produced by “Superbad”/“Pineapple Express” buds Seth Rogen and Evan Goldberg. But last night the fun began even before the special screening on the red carpet at the Landmark’s Sunshine Cinema on the Lower East Side. (Across town on the Upper West Side, the new Superman movie, “Man of Steel,” had its world premiere, which may have been way glitzier, but I’m sure not nearly as much fun.)

“This Is The End” is an apocalyptic-comic-horror film about six well-known comedic actors, who play themselves, trapped inside James Franco’s minimalist and absurd cubist-style home in the Hollywood Hills during a drug and alcohol-fueled party after catastrophe and devastation strike Los Angeles.

Rogen plays the friendly guy who gets along with everyone, and his skinny pal, Jay Baruchel, is from out of town and doesn’t fit in with Rogen’s new, rich and famous friends. Baruchel particularly hates Jonah Hill, who is very friendly but also very weird, and wears a huge diamond stud in his ear.  Later, Jonah gets assaulted by a demon (don’t ask) and goes all Linda Blair, spewing green bile. Stuck in the bunker-like atmosphere of Franco’s estate, these guys are forced to share limited space, water, liquor, food and weed with survivors, who also include the likeable and very funny Craig Robinson and the manic Danny McBride, a sociopath with scarily bad hygiene.

The movie’s many pleasures include watching Rihanna slap around Michael Cera, who snorts coke and blasts obscenities. Then there’s Emma Watson who swings an axe as she sends up her Hermione image. (Daniel Radcliffe was also offered a role early in the process, but “the script wasn’t good enough so he said no,” director Goldberg said on the red carpet.) Other cameos include Mindy Kaling, who has a Jones for Cera, and Channing Tatum in an S&M mask and on a leash.

It’s not giving away much to say Cera doesn’t stick around long. But as one survivor notes, mass destruction is not all bad, “If Michael Cera’s dead, it’s not a total loss, huh?”

A reporter asked Goldberg on the red carpet: What made him think all these guys just hanging out being themselves would make an interesting movie?

“We didn’t,” he replied. “That’s why we had to make the apocalypse happen.”

I asked Goldberg what inspired his kooky idea for the film.

“I used to be roommates and went to university with this guy Jason Stone,” he told me. “He was going to USC, and one night we tried to think up a film for his student program and we came up with an idea, he and I, to do the Apocalypse but in a small room where the characters won’t leave. So we made this short movie that’s online called ‘Jay and Seth Versus the Apocalypse’ with Jay (Baruchel) and Seth. Separately Seth and I had been cooking up this idea where people play themselves. And over the years we merged these two ideas together, ’cause neither seemed sufficient enough. And it formed what you see today.”

He told me the original short had even more horror scenes. “After we made ‘50/50’ [produced by Goldberg and featuring Rogen], we had this rhythm in the film where it was like you’re sad about the cancer and then you’re laughing. It created like a fun rollercoaster, and we kind of wanted to do the same thing with this, where you’re genuinely afraid and then you laugh. Then you’re afraid and then you laugh. So that’s kind of why there’s the horror,” said the Canadian director-screenwriter.

I asked, What’s the biggest challenge of directing actors who play themselves or exaggerated versions of themselves?

“I would say it’s not a challenge,” Goldberg said. “It’s a massive relief because they have this whole pool of information to dip into. Everyone in the movie knows when they’re improvising that they can comment on how Craig’s from Chicago or how he was in ‘Hot Tub Time Machine’ or how Jay does a lot of Canadian work. So for the actors, the actors usually have to learn their own character, but in this one, they know each others’ characters, so they can better play with one another as opposed to if they all had constructive characters, they would be less intimate and their jokes would be less funny, I think.”

If there was an Apocalypse, I asked Goldberg, which of the actors would he most like to be with?

Rogen was next on the carpet. The feisty 19-year-old-reporter next to me asked questions I could never top.

If there was an Apocalypse and Rogen was in the house alone with his wife (actress-screenwriter Lauren Miller), what kind of moves would he put on her?

“That’s a good question,” Rogen laughed. “I’d probably have to try something crazy. I’d jump off the house onto her, something like that, off the top rope. Yeah, that would be my big move,” he laughed.

And did he have any parental advice for Kim Kardashian, the young reporter asked.

“I guess it’s too late to say don’t have a baby,” Rogen chuckled, “but that would be my advice.”

Those questions were a hard act to follow, but I barreled away. What was the biggest challenge in directing his friends?

“Giving them personally uncomfortable directions maybe, but they were all game to do it,” he said. “I think it’s making sure that I wasn’t too inside and that everyone would think it was funny and would relate to it, even though it was about us.”

Were there any unexpected moments during filming?

“Oh man! There was a lot, but I think I was just overall shocked by how hard people would go at themselves, in general, and what we got a lot of these people to do is pretty ridiculous,” he laughed.

Could he give me an example?

“Michael Cera does a lot of cocaine in this movie, so that was fun to watch,” Rogen laughed in his famous low decibel honk that sounds like “HA, HA, HA.”

The amazing after party was at the new hot spot The General in the Bowery. The event was hosted by Fiji Water, Svedka cocktails and Dark Horse wine. Many guests sipped from Fiji bottles with straws. Ed Norton in a baseball cap was hunkered at the bar, and other guests included Judah Friedlander, Megan Hilty, Gabourey Sidibe, Goldberg and Rogen.

“This Is The End” opens in theaters nationwide on June 12, 2013. It’s rated R for crude and sexual content throughout, brief graphic nudity, pervasive language, drug use and some violence.