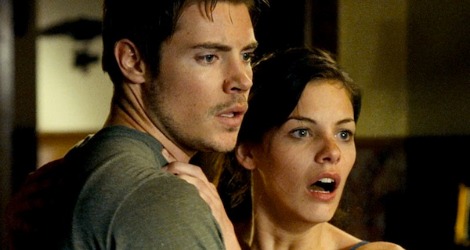 “Rushlights” is a new noir, pulp movie set in Texas – a minimally violent thriller that winks at you from time to time. Beau Bridges as the “small town sheriff” with expressive eyebrows and Aidan Quinn as the histrionic “small town lawyer” seem to have fun with what appear to be intentionally stereotypical roles. I enjoyed watching the two play brothers who spar and clash.

It’s a small town, so there have to be outsiders to wreak havoc with what at first looks like a serene existence. Josh Henderson (recently of “Dallas”) and Haley Webb play those roles, arriving to pull off a scam that just falls into their laps when a friend overdoses, leaving behind a letter about her inheritance. It just so happens that Webb’s character looks an awful lot like the deceased. How convenient! Or not.

What follows is one twist after another after another that tie the plot into such a knot, you wonder how it will ever untangle itself into some sort of ending. But just when you think the moral of the story is to never, ever, ever attempt inheritance fraud … well, something else happens that you didn’t see coming.

Written by Ashley Scott Meyers and Antoni Stutz and directed by Stutz, “Rushlights” will hardly be studied ad nauseum in film school. But it’s a fun and entertaining ride. It opens in theaters today, June 21, 2013, and I’m told it will be out on DVD in July.