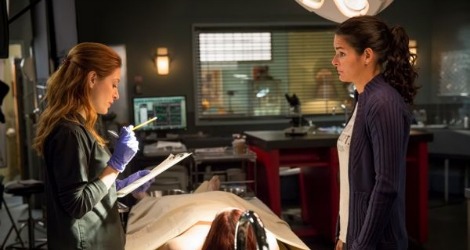 One of the things I love about “Rizzoli & Isles” is the genuine friendship between the two female leads. I haven’t watched the entire run of the series and am basically just jumping back in after watching sporadically over seasons two and three, but I’ve not seen any cattiness or jealousy or any of that. Just best friends who love and support each other through thick and thin. And who I’m sure go through the usual ups and downs of friendship. Thank you, TNT.

In the season four opener, the story picks up several months after the end of season three. Maura ended up giving a kidney to her half-sister and is perturbed that she didn’t even get a fruit basket. But when they see each other on the street, they agree to be friends and text each other. Maura’s biological mom? That’s another story.

Jane hasn’t heard from Casey in months, but he’s soon back in her life, after she finds him at her doorstep when she and Maura run home one night. Maura makes a quick exit, and Jane and Casey end up spending the night together. He still has braces on his legs, but he’s doing great and tells her he had to get through PTSD and recovery before he could see her again. A little ripped-from-the-headlines story there.

They’re clearly happy together, but he tells her he’s going to Afghanistan for a few months to work with combat soldiers there. When he gets back, he wants to “give it a shot” with Jane. She’s happy, but later tells Maura she’s secretly relieved that she doesn’t have to jump into a domestic relationship. What’s next, she says. Mom jeans? The whole thing freaks her out a little.

And I already have a bad feeling about Casey being over there, but we’ll see how that goes.

The crime of the week involves an environmental scandal in which a female senator ends up getting shot during a parade. As usual, I had no clue who the shooter was until the very end.

Are you watching “Rizzoli & Isles”? Your thoughts on this episode?